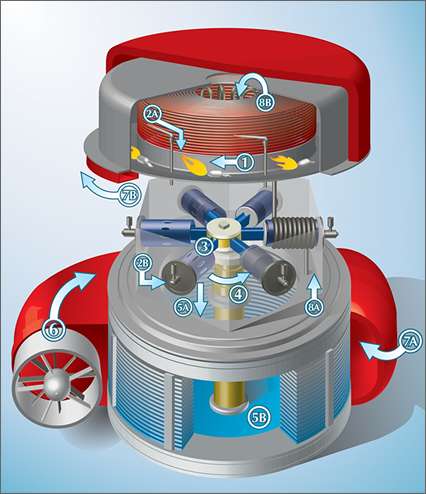 Raytheon engineers are addressing the need for an alternative power source for military use through the use of external combustion engines and monopropellant fuels. Enter its arrangement with Cyclone Power.
Advertisement

"There should be no doubt about Raytheon's support and commitment to Cyclone's technology," stated Christopher Nelson, President of Cyclone. "We view their initial purchase order, announced last month, as constituting the beginning of a long and very important relationship, not only for Cyclone and Raytheon, but also for the capabilities and efficiencies of our military."

As a result of this partnership, Raytheon Company (NYSE: RTN) has featured Cyclone Power Technologies' engines in Technology Today, Raytheon's quarterly print and online publication distributed to over 80,000 military and civilian customers, suppliers and partners. The article called Cyclone's engines being developed for Raytheon for undersea power and propulsion applications as "game-changing."

According to the article, the U.S. Navy has called for increased stamina in unmanned undersea vehicles to enable missions that can last for weeks, not just one or two days. Be apprised this criteria exceeds the energy capability of traditional battery technologies.

To better meet the needs for military use, Raytheon is employing a monopropellant developed by James R. Moden Inc. to fuel this engine. It is also developing the surrounding system components to change the air-breathing, external combustion engine into an undersea vehicle propulsion system providing electrical energy for electronic control, vehicle/payload power and battery charging.

For the record, all Cyclone engine uses external combustion, which is very insensitive to fuel formulations or the degree of refining required to meet its performance specifications. If it can burn, a Cyclone engine can harvest the energy content. That characteristic opens up a new realm of promising possibilities for military as well as automotive and waste heat recovery use to generate electricity.

One doesn’t have to go far to see the potential for other applications beside military. For example, the Cyclone Power is the very same company that is providing the steam engine for the LSR in its attempt to break the land speed record, set in 1998 at 148.308 mph. With a 200 mph capable vehicle, that means the potential return of the steam engine for automobiles is real.

Furthermore, Cyclone Power Technology already has a family of external combustion engines like the Waste Heat Engine (WHE) which recaptures heat from external sources to create steam, which powers the engine. The WHE models are designed to provide 5 to 10 kilowatts to run a grid-tied or primary electric power generator while producing zero emissions.

Another engine, the Solar One, provides one to three kilowatts of electricity from solar steam generators. These engines can also run a grid-tied or primary electric power generator while producing zero emissions. The MK 5, for example, produces 100 hp and is designed for automotive, marine propulsion, power generation, off-road equipment, industrial co-generation and specialty applications.

For military applications, though, Raytheon customers often have needs for remote or high-dynamic range power. According to the article, environmentally friendly, high-efficiency external combustion engines yield an intriguing alternative.

tom jones wrote on August 13, 2011 - 3:38pm Permalink
where can I buy one and how much do they cost?
Anonymous wrote on October 23, 2012 - 9:39pm Permalink
yea same here . theres no fricking point in comming up with it if u cant even fricken buy it. i want to buy this .but all i can find is information about it