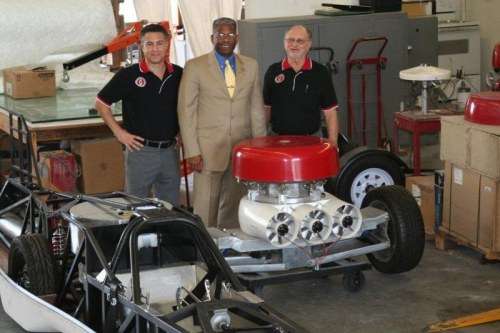 It's heartening to see a member of congress explore cost-savings as it applies to military engine opportunities. Cyclone Power Technologies, Inc got its opportunity from Congressman, Allen West of Florida.
Advertisement

For the record, the news release implied Rep. Allen West has formal military training, as it referred to him as Col. short for Colonel West. That would make his visit all the more substantial in it representation of the technology back to Congress as well as the Pentagon.

The goal was to demonstrate the Cyclone Power engines' eco-friendly, multi-fuel technologies, and discussed the viable cost saving opportunities they present for both military as well as civilian power requirements.

While many companies want to believe a steam engine cannot compete in the modern world, especially for vehicles, they may be sending themselves strong delusions. Fact is, Cyclone Power Technologies Inc. (Pink Sheets: CYPW) is already the developer of the award-winning Cyclone Engine, a high-efficiency, modern American steam engine.

Its compact, powerful and versatile design can power, not only a variety of applications from solar thermal power plants and waste fuel or waste heat recovery systems, but land and sea transportation for the 21st century.

The Cyclone Steam Engine is able to run on any fuel from gasoline and diesel to green alternatives like locally grown bio-fuels. That flexibility can help diversify the energy requirements of both military and civilian power generators and vehicles. This benefit alone could provide major cost-savings on the high price of supplying and supporting troops in forward operations.

"I'm very impressed with what Cyclone Power Technologies has accomplished - an innovative engine that can advance energy independence and create jobs right here at home," stated Representative West of Florida‘s 22nd district. "For our armed forces, this technology can support critical missions on land and sea in a manner that strengthens the capabilities and efficiencies of our troops, while also saving the military hundreds of millions of dollars in logistics, replacement costs and support operations."

In response, Cyclone's CEO, Harry Schoell, said, "We're thrilled to have Col. West experience our technology first-hand; understanding and valuing the many benefits it presents for our nation's future. We believe that his leadership in seeking out solutions to strengthen our military's power capabilities fits perfectly with our vision for Cyclone engines."

Invented by company founder and CEO Harry Schoell, the patented Cyclone Engine is a modern steam engine, ingeniously designed to achieve high thermal efficiencies through a compact heat-regenerative process, and to run on virtually any fuel - including bio-diesels, syngas or solar - while emitting fewer greenhouse gases and irritating pollutants into the air.

Currently in its late stages of development, the Cyclone Engine was recognized by Popular Science Magazine as the Invention of the Year for 2008, and was presented with the Society of Automotive Engineers' AEI Tech Award in 2006 and 2008. Additionally, Cyclone was recently named Environmental Business of the Year by the Broward County Environmental Protection Department.

The engine is being mounted to a racer as it attempts t break the LSR (Land Speed record) for a steam-powered vehicle. In this case, the engine will not use a jet blast of steam to propel the vehicle, but use the steam fro the external combusition engine (ECE) to drive reciprocating pistons.

Disclosure: Frank Sherosky, creator of stock charts and author of "Awaken Your Speculator Mind" does hold a small position in this equity at this time as part of his long-term retirement account.