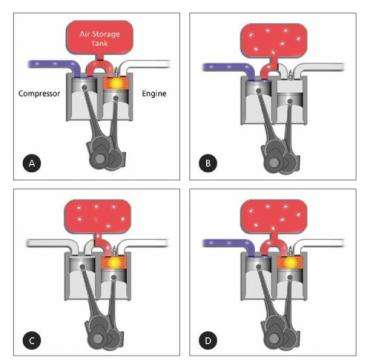 As the Center for Automotive’s Management Briefing Seminar for 2011 is now officially closed, few analysts will peer into the words that were not said as much as what was stated. One area is the Advanced Powertrains, and the uncertainty of auto management teams to choose a best technical direction when it comes to the IC engine.
Advertisement

It wasn't Marchionne's hint at retirement and succession that caught my attention, but the Advanced Powertains session among the seminars. There was little mention of split-cycle engine technology except when I placed it on the Q&A cards. Miller Cycle was mentioned only once, and HCCI mentioned maybe three times but without fanfare.

Like every other automotive seminar, conference and media event like the 2011 CAR Management Briefing Seminars in Traverse City, Michigan, there is always the risk of unintended messages. Instead of full confidence, the automakers left us with ideas and concepts, but no firm direction on how the industry will meet the 54.5 mpg mandate. After all, electrification and hydrogen lack infrastructure.

Instead, the automakers and presenters made us aware that the connectivity of the automobile is real, the here and now, and with a definite choice of where we are going. Again, not so certain with power trains. Lots of choices, but no firm direction.

Point is, the auto industry is good at attending media and social events while not really saying anything new; in other words, they often tell the media and attendees the obvious. I heard this same negativity from other media types. That, with all respect to the fine organization of the MBS 2011, was the case at CAR.

First, understand that the CAR Management Briefing Seminar is truly a “briefing” seminar. That means the flow of information is measured thrice, filtered twice and delivered once. The result is, it also reveals very little of the future as we need to understand it; and wastes a golden opportunity to get the public on their side.

Despite accepting proposed 54.5 mpg rules for 2025, I doubt the auto industry really knows what it’s going to do to meet it, for example. I think they’re hoping on time. Again, hydrogen needs an infrastructure, Ford is waiting to see if diesels can be popular in America, and GM is hedging its bets by spreading on multiple technologies. And nobody gave any detail on natural gas as a saving fuel for America.

Second point is, the industry knows the IC engine is not going away anytime soon; it is and will be the power plant of choice due to its lesser cost. However, the ICE needs a quantum tech leap, not incremental tweaks over the next 14 years; but that seemed to be the implication at CAR. Sure, electrification works, but its expense is limiting for the average wage earner; further supporting, the IC engine cannot go away anytime soon. And these seminars admitted that much.

Time to split the 4-cycle engine?

So, when I submitted the question about the split-cycle technology during the Q&A segment of Advanced Powertrains, I half expected a much clearer answer than I received; and, moreover, what the attendees deserved.

Frankly, I’m weary of these managerial types sitting in forums and telling us things we can read on the internet with a good Google search or visiting Torque News. Considering the need to not avoid China at our own peril (Marchionne’s words, not mine), one would think a little more advanced vision would be expected and delivered by these managers relevant to the one powerplant they all agree is not going away. But no, they opted once again to play political poker like our reps in Washington.

For the record, I experienced this same phenomena at the Detroit 2.011 AutoBeat Insiders Conference just a few weeks ago. The lack of technological vision there was shocking, except for one expert.

In the case of CAR, these are the folks in charge of advanced engines and powertrains. If they are uncertain (and they said so in so many words), then who does know? Furthermore, who has the chutzpah to make the future happen sooner, because all know we need it now, not in 14 years? At least GM put out the Volt; Toyota has its hybrids and future fuel cell plans; while Nissan has a full electric. That’s the kind of industry chutzpah I’m writing about.

Toyota at least delivered truth in its presentation on hydrogen fuel cells. For a company that was behind GM in this area, they sure caught up fast. Fact is, an infrastructure will still take money and time; two things that the industry fails to manage effectively, but Toyota is committed to delivering a production vehicle in our lifetime. In typical fashion, GM and Ford are still in we-don’t-know-when mode. At least GM has the Cruze diesel coming.

Back to my split-cycle tech question

The answer that the panel gave regarding my split-cycle engine question was especially disturbing. These leaders acted as though this was a pie-in-sky, advanced technology, that they may consider. May consider? What other option is there? It’s the only frontier that the industry has not tried.

Consider the fact that ALL automakers are at the same level of production engine technology right now. Fact is, the auto industry cannot supercharge its way to 54.5 mpg. It needs drastic makeovers, but not to the expensive degree that they implied at this seminar.

So, to add to their forum agenda next time, I suggest the following: For commercial trucks as an initial target, consider the Achates Power engine with an opposed-piston diesel. For cars and trucks, we have the Scuderi Group's split-cycle air hybrid (see image) which can be applied to cars and truck from gasoline, nat-gas to diesel; and competes with electrification. And the Tour split cycle engine is similar except with an opposed piston arrangement.

Then we have the external combustion, steam engine of Cyclone Power which has been chosen by the U.S Army for its Auxiliary Power Units (APU); and Raytheon claims as “a game changer.” It burns so completely that it use waste fuels and results in ultra-low emissions.

Yet, not one mention of that kind of technology was made at CAR MBS2011, even in the generic sense. Perhaps an invite to a researcher or a media type with automotive experience may be more revealing.

With all respect, I do not write this article for long-time TN fans, because they already know better; meaning, we have written it here far too many times before. No, I write this for all the CAR MBS 2011 attendees and the presenters, because the so-called Advanced Powertrain information revealed far too little, in my opinion.

The presentations may have completed the seminar mission of powerpoints and time, but failed to completely inform the attendees who paid dearly to listen for some hope that we will be energy efficient with our IC engine transportation. One exception was Toyota’s detailed revelation on its fuel cells, but wasn't IC engine related.

Point is, if the American automakers do not address this IC engine dilemma soon, the Chinese will likely have another way to meet the hearts and minds of American buyers - via their pocketbooks due to more cost-effective products. And they will likely do it by using the same engine technologies that we discarded or treated as too advanced to spend the investment money, or even discuss with any depth.