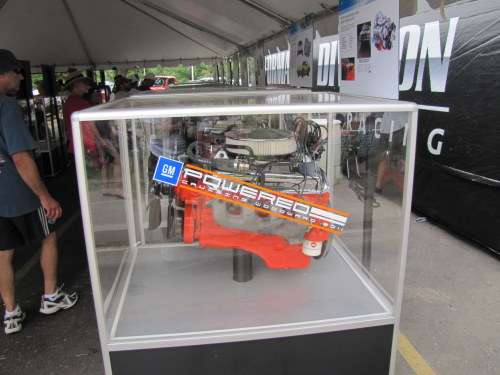 GM Performance Division may always be present at the Woodward Dream Cruise, but the degree of participation for Chevrolet’s Centennial celebration was extraordinary in 2011 with a complete display of Chevrolet engines.
Advertisement

GM’s Performance Division showed how engines rule the street with multiples of displays at the 2011 Woodward Dream Cruise. And while the cruise may be officially over, I’ll bet someone is considering buying a crate engine to fit into their dream rod for next year.

Fact is, the Chevrolet Centennial celebration at the Woodward Dream Cruise this year was outstanding. It definitely helped this cruise maintain its title as being by far the largest, with more than a million car fans flocking to Detroit’s legendary Woodward Avenue in an event classified by an earlier GM news release as the "motorized equivalent of Woodstock."

As part of a pre-cruise event, even GM Design (Studio) folks showed their own collection of cars on Wednesday, where this reporter took plenty of pics and videos. However, the GM Performance Division display was not ready yet.

So, on Saturday me and Judi took our Chevy HHR down Woodward from South Boulevard near Pontiac until we arrived at 13 Mile Road. Of course, parking was hard to find, but we finally found a spot and walked directly toward the GM Performance Division station near Memorial Park just north of the Woodward and 13 Mile intersection.

The display included a collection of classic Chevrolet engines like the 265 cubic inch V8, the 283, the 327, 302, 350 and a host of modern crate engines. Attendees were able to watch professional engine builders from the GM Performance Build Center in Wixom, Mich., disassemble and reassemble a Chevrolet Corvette ZR1 engine, and see how the masters do it.

Most notable was the E-ROD emission-compliant 1955 Chevy Bel Air hot rod, along with other concept, classic, and current hot rods. Technical experts were on site to answer Cruisers’ questions.

While I was shooting a video set of the Clean Rod, a ‘55 Chevy, a gentleman voiced how it didn’t look right. He had a problem with the engine looking too modern in an old car. Well, that was his opinion, as another gentleman told me he definitely liked the package and how clean it looked.

So, for those who could not attend, I especially focused on the Performance Division with a set of videos, and you can make your own judgment.

Again, enjoy and be safe until we meet again at the 2011 Harper Charity Cruise on August 31st.

Elon Makes a Cybertruck Statement With an Action, But Quiet in Words
Tesla's Record Month in China: Doubled Registrations in March 2021
END_OF_DOCUMENT_TOKEN_TO_BE_REPLACED