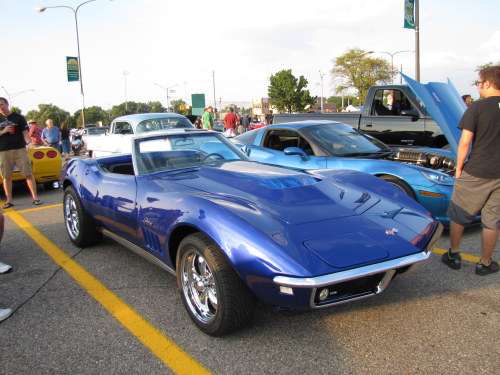 Throngs of car enthusiasts gathered late Wednesday to celebrate the preliminary events of the 2011 Woodward Dream Cruise, most notable at the corner of 13 Mile Road, where Chevrolet’s Centennial celebration featured personal vehicles owned by members of the GM Design team, along with live musical performances.
Advertisement

The Woodward Dream Cruise is by far the largest, with more than a million car fans flocking to Detroit’s legendary Woodward Avenue for the motorized equivalent of Woodstock, but the days leading up to the Saturday event has grown significantly.

As part of a pre-cruise event, GM Design (Studio) folks showed their own collection of cars. Frankly, I thought I would have met more GM employees fronm my past, but that was not to happen, except for a few; and a few of them are retired as well.

Still, the south-west corner was ereserved by GM and Chevrolet. In past years it was Ford and Dodge. The Chevrolet Centennial certainly deserved the spotlight.

Yet there were cars from every manufacturer as well as well as foreign vehicles, like the Austin Healey Bug-Eye Sprite which I owned when I was a teenager. Still, the '55-'57 Chevy era always catches my eye as my first car was 1955 Chevy.

I especially want to thank my friend, Ray Talley, for buying dinner after the event. He usually drives, but this year it was my turn; plus his truck needed a fix from what I hear. In past years, Ray would drive up and down Woodward while I hung out of the window with my camera. Ah, good times!

According to recent a Chevrolet news release, Chevy-related events will be ubiquitous at this year’s Dream Cruise. On Thursday, August 18, for example, Chevrolet will kick off the Dream Cruise with a parade on Woodward Avenue starting at 2 p.m. The parade will feature 50 Chevrolet Volts and their owners in town for Volt’s first Cruise, 20 employee-owned Chevrolet heritage vehicles, the new Camaro ZL1 and Chevrolet Sonic, and vehicles from the GM Heritage Collection. The parade will start on Woodward Avenue at Long Lake Road, travels south to I-696, and return.

In addition, GM’s Performance Division and Performance Parts display will be open from 10 a.m. to 9 p.m. at Memorial Park on the NE corner of Woodward and 13 Mile Road. The display will include a collection of classic engines and modern crate engines. Attendees will be able to watch professional engine builders from the GM Performance Build Center in Wixom, Mich., disassemble and reassemble a Chevrolet Corvette ZR1 engine, and see how the masters do it. The E-ROD emission-compliant 1955 Chevy Bel Air hot rod will be featured, along with other concept, classic, and current hot rods. Technical experts will be on site to answer Cruisers’ questions.

On Friday, Camaro Chief Engineer Al Oppenheiser will participate in the Motown Muscle breakfast and panel discussion from 8:15 to 9:30 a.m. at Duggan’s Irish Pub in Royal Oak. The new Camaro ZL1 will be on display. Jeff Gilbert and John McElroy will host the panel, which will also include representatives from Ford and Chrysler. The public can register online.

On Saturday, the official Cruise Day, Chevrolet Activities at the Birmingham Triangle will be the focus. Chevrolet displays and activities will start at 8 a.m. Saturday and run through the conclusion of the Cruise at 9 p.m. Some 60 cars will be on display, ranging from heritage vehicles to the new Volt, Sonic, Cruze Eco, and Camaro ZL1. Also on display will be vehicles from the “Transformers” movies, and a selection of Indy 500 pace vehicles. Visitors will be able to capture themselves with a Time Splice 3D camera. Guy Fieri, host of “Diners, Drive-Ins and Dives,” is bringing two of his personal Camaros, and will be signing posters from 11 a.m. to 1 p.m.

Detroit-area Chevrolet Dealers will parade from 8 Mile Road to Pontiac, then back to 16 Mile Road, starting at 9 a.m. Saturday.

The Performance Division display will also be open Saturday from 8 a.m. to 9 p.m. at Memorial Park on the NE corner of Woodward and 13 Mile Road.