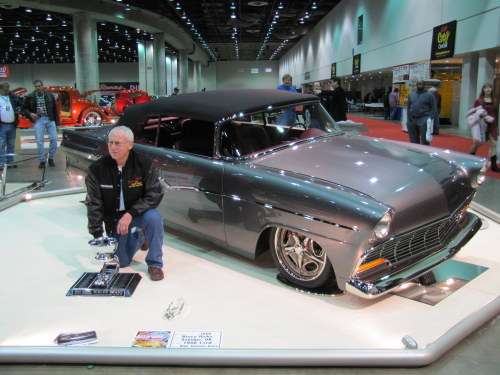 The verdict is final as the judges have chosen Entry Number 1600, the 1956 Ford convertible owned Bruce Ricks from Sapulta, OK for the Detroit Autorama 2011 Ridler Award.
Advertisement

It wasn’t easy this year with a field of 30 plus cars vying for the Ridler. Making the Pirelli Great 8 is already a major acomplishment, but the 1956 Ford owned by Bruce Ricks met the criteria for the Ridler.

As usual, it seems the car you think has the greatest potential does not always make the Pirelli Great 8 Finalists list, let alone the Ridler.

Aside from having to be a first time showing, the Ridler Award emphasizes three key elements as criteria for the judges:

And, lest anyone forgets, anyone who forgets those three elements should not even bother participating.

I stated in an earlier article that I thought Entry #1600, Bruce Ricks from Sapulta, OK with a 1956 Ford held a lot of favor. That 427 SOHC engine is a beauty; so modern and clean in the engine compartment, including the dual in-line four barrel carburetors.

Fact is, all of the Great 8 were officially contenders. Yet, as the judges were able to focus on a smaller group, they were also able to hear the presentations by each owner as to why their car was worthy of the Ridler more than the rest.

Congratulations to Rick and his team of builders.

I’ll follow-up here with pics in a gallery as well as video of the award on the floor of Cobo. Thus the Ridler Award officially ends the Detroit Autorama 2011.