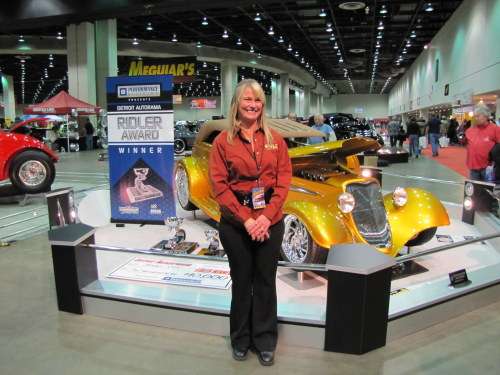 Three major events have been on the agendas of Detroiters all winter: The North American International Auto Show, the Super Bowl and the Autorama with the Ridler Award. This year’s Autorama will be February 25, 26 and 27.
Advertisement

Originally given to the Best Vehicle first-time shown, the Ridler Award has matured over the last forty years to reflect new ideas, changing designs and concepts. According to the show’s website, www.autorama.com, the award emphasizes three elements as criteria for the judges: creativity, engineering and workmanship.

Anyone who forgets those three elements should not even bother participating.

That’s why it is advised on the Autorama website that anyone building a vehicle for Ridler competition should post those words on their garage wall; keeping them in the forefront of the project. After all, only the vehicle that best represents those three areas will win the Ridler Award.

In addition, there two hard and fast rules that all entries must meet. They are as follows:

1. The vehicle must make its first public showing at the Detroit Autorama. In other words, no other public shows. The only exposure allowed are those to develop interest or to gain sponsorship and which give credit to suppliers and/or sponsors, magazine and video build-up coverage is allowed. No articles, video footage or stories with photos of the vehicle in finished form will be allowed until after the award has been presented.

Once the final Ridler Contenders have been determined, the field will be narrowed to 8 Finalists, which will be referred to as the Pirelli Tire Great Eight.

This proved the Detroit Autorama is no longer just for guys either, as America’s greatest hot rod show made Tammy Ray, owner of the 1933 Ford Phaeton called “Gold Digger,” winner of the prestigious Ridler Award.

Fact is, she was the first female owner to make the "Great Eight" field of finalists in 2006 with a different show car. This time, however, she made the Great Eight and won the Ridler.

You could sure tell she was from Georgia, though, and a very pleasant lady. When asked what was next, she said she would do the inside shows before the outside ones. But another car project was not on her agenda as this car took 2-½ to 3 years. I wrote at the time to she‘ll be back one day.

Once Tammy knew she had won, she was on the phone to quite a few people; one whom I overheard was Chip Foose. Again, the car may have had more than $100,000 worth of custom work invested in it, but it took a lot of team discipline to meet the Ridler criteria.

For the record, the owners of the '33 Ford called "Timeless" (seafoam metallic) were not pleased with the outcome, as I witnessed them with the judges going over the details as to why their car did not win.