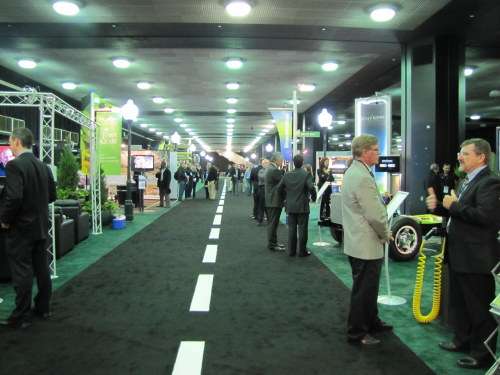 Electric Avenue at the 2011 Detroit Auto Show, also known as 2011 NAIAS, was moved from the main floor to the lower level at Cobo Center, but lit the way even more toward free rides and drives of electric vehicles.
Advertisement

At first, you might think the move to the lower level was a snub of some sort, but far from it. Electric Avenue has a greater visual effect in the basement than being on the main floor of Detroit’s Cobo Center.

Fact is, a lot has changed in one year. Nearly every automaker now has some kind of electrification as a choice to be viewed on the main floor, from hybrids to full EVs. In essence, the electrification of the automobile has become “normal”. And that is so fitting, considering experts are predicting higher gasoline prices which may reach $5 per gallon.

This is why it was so puzzling that Nissan, who recently released the Leaf, a full EV, was missing in action; and, even then, only some minor display in a hall way of all places.

A short trek down the escalator, though, will bring you to a more darkened area by the fact it’s a basement; but that literally looks like a road paved with illumination; very fitting for the theme.

You will see electric bikes, solar power, wind power, log home materials, LED lighting and SPX, the company that makes the charger for the Chevy Volt. More on that in a separate report.

The State of Michigan was well represented, especially when the new governor, Rick “the nerd” Snyder came though with his entourage. Companies who supply green technology were mainly featured, such as LumaSmart, the make of LED lighting. DTE Energy was there, the main supplier of electric power in southeastern Michigan.

Once through the displays of Michigan-based energy technology along the roadway, there is a line to sign up for a ride in a large selection of full electric vehicles.

There, you will have the opportunity to drive the new 2011 Chevy Volt, of which there is more than one available, along with a selection of other vehicles to numerous to mention. Be prepared with your drivers license to take a breath test.

One vehicle next to the line where you sign for the rides really caught my attention, though. It was fantastic acoustic experience inside an automobile. More on that Bongiovi Acoustics technology in a separate article, simply because it deserves one.