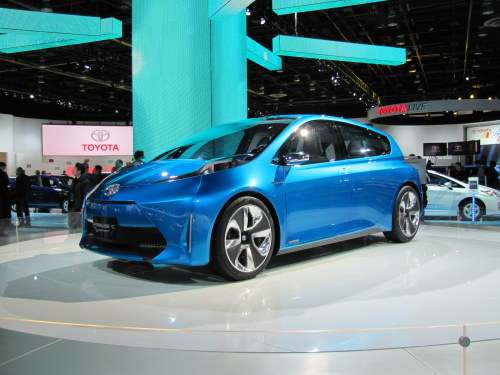 Toyota already enjoys plenty of notoriety with its Prius Hybrid. Now the 2011 Detroit Auto Show shows Toyota doing more than expanding the vehicle’s length with the V and showing a sportier C concept. It’s the expansion of the platform’s marketability.
Advertisement

Much has been written and said about the choice of technology for the Prius. Some may prefer a larger car, while others want something sportier. Enter the Prius V and the Prius C concept (shown).

April was a great help at the Toyota display explaining the differences beyond the obvious; especially while I scrambled to tweet the message from the show floor today. Likewise, the entire Toyota display was helpful in that it had free charging stations for all types of phones for the press. How thoughtful!

When asked, she pulled up the stats which showed the Toyota Prius V gaining 50% in cargo volume. While that is significant, so is the extra weight to the tune of 300 pounds. Still, it is the convenience and need for space that the customers have been demanding; and Toyota has obviously listened; and the hybrid drive can handle it.

Bottom line for the Prius V is that the hybrid format for Toyota is working; and now it’s proving to be scalable.

The choice of technology and chemistry may be different than the formats chosen by other companies. That's just a matter of techncial taste. Truth is, there’s room for technical variations, because the automotive market itself is so varied.

That Prius C concept tells the world from the 2011 Detroit auto Show a slightly different look is achievable, but all under the same technical format that has made the Prius brand acceptable by the public. Electric and hybrids are not dull by any measure.

The main message for either model is clear, though: Toyota is expanding the marketability of its Prius line of cars.