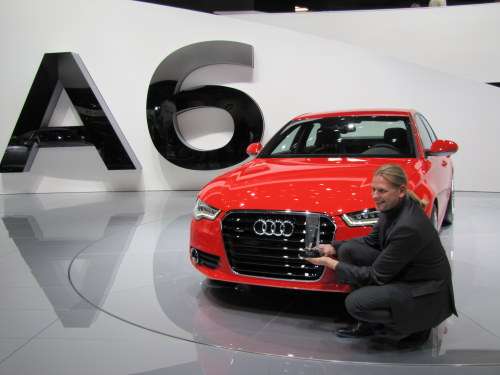 The 2011 Detroit Auto Show opened the first day of press preview with a major NAIAS event, the Car & Truck of the Year Awards, and ended the second press day with the EyesOn Design (EOD) Awards in two segments for design excellence: concept and production.
Advertisement

The Audi A6 won the EOD Production award while Porsche won the Best Concept with the 918 RSR.

In its sixth year, the EyesOn Design (EOD) Awards honors the best production and concept cars making their North American or worldwide debut at the North American International Auto Show (NAIAS) in Detroit. Keeping with the spirit of other EyesOn Design events, the EyesOn Design Awards are selected by active and retired design heads of automotive OEMs, transportation design chairs from top art schools, and designers from other fields.

According to the official website for the award, each of The EyesOn Design Awards, is recognized by each automaker as a validation of its work by its peers, and it is covered each year by the automotive, national, and international press.

Today’s awards were dedicated to Chuck Jordan, former General Motors VP of Design who passed away recently. It was Jordan who pushed hard for the event, along with a few other voices from the industry.

Once announced, the design representative from Audi who received the award, (and whose name was garbled a bit from the podium), seemed so pleased and surprised at the same time. Even on the floor, he was very cordial especially with interviews after the press took their turns clicking the cameras in various poses; some with award in hand, and a few with the award on the hood.

When asked what was the one element that made the A6 so successful; because it was a repeat award from last year’s A8, he strained at first to find just the right words. Then he made it clear he wanted to communicate a new direction for the new decade.

He especially noted how most designs start with a new platform, and often pick up weight along the way. Fact is, the new A6 is about 120 pounds lighter and uses the same basis platform. That’s where the challenge came in; and that’s when he added the word “progressiveness” to convey the use of a drop tail sculpture on the rear deck.