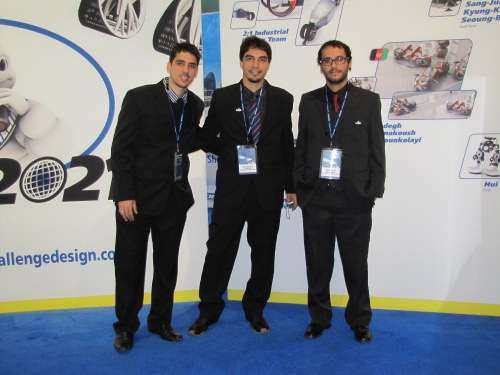 Some years at auto shows like the Detroit Auto Show are more visionary than others. No matter what the mood, though, you can always depend on the two major creative displays by students: Michelin Design Challenge and the College for Creative Studies (CCS).
Advertisement

Apart from the auto displays from around the world, this indeed proves the theme of the show is truly international, it's professional like the three men shown, and supports the industry even at the student and design challenge level.

The 2011 NAIAS display for the College for Creative Studies (CCS) at the Detroit Auto Show once again does the local Detroit college proud along with its alumni, many who are working in the auto industry; and many who provide the concept cars we enjoys at each show.

There is a collaboration between CCS and various companies. On in particular is with ArvinMeritor which was established in 1998 with the "Visions of the Future" automotive design competition. The company continues to support educational institutions and programs worldwide with more than 50 percent of its contributions budget.

For the second consecutive year, though, ArvinMeritor has entered into a heavy-duty truck design partnership program with one of the nation’s leading art-design universities, College for Creative Studies (CCS) in Detroit. This year’s semester-long program -- involving 15 senior-level students -- focused more on impending government regulations to slash fuel consumption and emissions by 10 to 20 percent. Navistar International’s truck designers also consulted on the project.

The program celebrates its milestone by returning to the 2011 Detroit Auto Show with an exhibit displaying various forms of design innovation and examples of the partnerships necessary to make this kind of program a long-term success.

Created to recognize and support design by providing an opportunity for designers from all over the world to present their most interesting works at one of the world's premiere auto shows, the program has seen dramatic growth it its first decade.

The theme for 2012, being announced at NAIAS, is: City 2046: Art, Life and Ingenuity. In honor of Michelin's tradition of innovation, 2046 was chosen because it is the 100th anniversary of the radial tire.

-----------------------
About the Author: After 39 years in the auto industry as a design engineer, Frank Sherosky now writes articles, books and ebooks via authorfrank.com, but may be contacted here by email: [email protected]