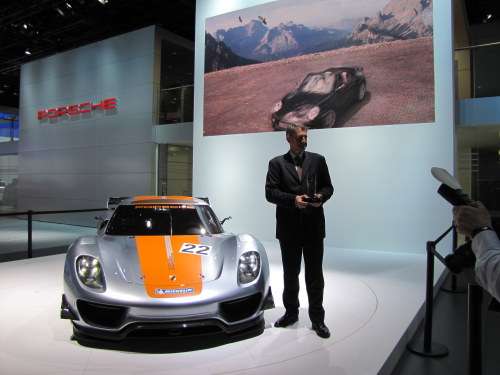 The 2011 Detroit Auto Show and the NAIAS organization missed the presence of Porsche last year. For its return appearance, the company showed its creativity with the 918 RSR, and the panel of judges all agreed it deserved Best Concept.
Advertisement

Beyond the press information which labels the Porsche 918 RSR as a laboratory with even higher-performance hybrid drive, the automobile presents a high-end synthesis of 2010's successful hybrid concepts.

Point is, when compared to other concept cars at the Detroit Auto Show, this vehicle displays a production appeal. Far more than a race external skin and visionary interior, once you understand the real technology underneath, then you see why the judges chose this vehicle.

First, the two-seater mid-engine coupé 918 RSR clearly reveals what happens when the technology fitted in the 911 GT3 R hybrid and the design of the 918 Spyder are transferred to a modern, innovative super sports car.

With its highly-efficient flywheel accumulator, the 911 GT3 R hybrid racing car proved to be an attention magnet during competition racing on the Nürburgring Nord schleife circuit, during the American Le Mans Series races (ALMS) in Road Atlanta/USA and the ILMC run in China's Zhuhai. It demonstrated its massive performance potential under realistic motor racing conditions against top competitors.

In the 918 RSR, the two electric motors offer a torque vectoring function with variable torque distribution to the front axle. This additionally increases agility and improves steering response.

Mounted upstream of the rear axle, the mid-engine is integrated with a racing transmission also based on the RS Spyder race car. This further developed six-speed constant-mesh transmission with longitudinally mounted shafts and straight-toothed spur gears is operated using two shift paddles behind the racing steering wheel.

This flywheel accumulator is an electric motor whose rotor rotates at up to 36,000 rpm to store rotation energy. Charging occurs when the two electric motors on the front axle reverse their function during braking processes and operate as generators.

At the push of a button, the pilot is able to call up the energy stored in the charged flywheel accumulator and use it during acceleration or overtaking maneuvers. The flywheel is braked electro-magnetically; in this case to additionally supply up to 2 x 75 kW, i.e. a total of 150 kW, from its kinetic energy to the two electric motors on the front axle.

This additional power is available for around eight seconds when the system is fully charged. In the successful 911 GT3 R Hybrid, this additional power can also be used as a consumption aid depending on the racing situation, e.g. to delay pit stops or reduce the fuel tank volume and therefore the weight of the vehicle.

With the new 918 RSR racing laboratory, Porsche is now elevating this motor racing hybrid concept to an experimental level. In the 918 RSR, “Porsche Intelligent Performance" equates to research into methods for further sustainable efficiency improvement under the intensified conditions of the race track, lap times, pit stops and reliability – an arena in which Porsche has been demonstrating its success for over 60 years.

Anonymous wrote on July 13, 2011 - 9:26am Permalink
http://carreviews1.blogspot.com/2011/07/porsche-918-rsr-concept.html Something spectacular" was what Porsche promised to reveal upon their return to the Detroit Auto Show after two years of absence. The company did not oversell. Its new car, the Porsche 918 RSR is spectacular, but it's also an interesting proposition. Rather than just tack a coupe top onto their 918 concept car, they've gone and made it into a racing laboratory, complete with the company's remarkable flywheel accumulator hybrid system riding shotgun in the passenger seat.