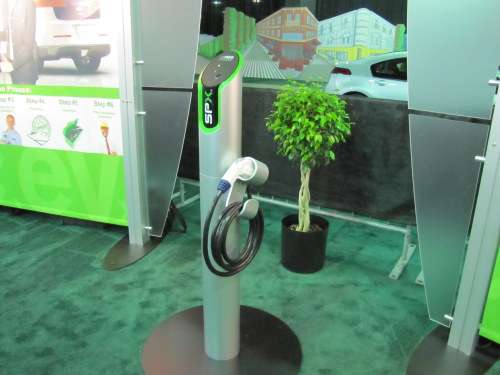 Despite all the Electric Avenue hype at the 2011 Detroit Auto Show, a full EV is not as green as you might think.
Advertisement

True, cars like the Nissan Leaf, the Ford Focus EV, the BYD Electric from China, and the Tesla S to be made in America make little to no noise running. Even the Chevy Volt is a full EV for the first 40-50 miles.

You might also point out that each has no tailpipe except the Volt, as there’s no engine exhaust in a full EV to pipe out .

Yeah, that makes them fully green, you say. Well, not so fast.

Here’s what folks who go wild with their money over full EVs don’t realize: America does not generate the majority of her electricity from wind and rainbow generators.

That means, full EVs like the Nissan Leaf, the Ford Focus EV and the Tesla mostly burn coal every time they’re plugged into the power grid.

What was that? Did you just hear a pin drop? Surely other analysts realize this.

Right now, natural gas is responsible for about 24% of our electrical generation capacity; and that‘s going to rise. Yet, as the U.S. government wants the nation to go green, natural gas is the best commodity in our soil to carry the country through the transition.

Until that is determined, natural gas is still one of the most green plays right in America right now. And, unfortunately, only Honda has a viable option in play for the average driver with its GX model. How ironic!

At the very least, our fleets of trucks should be converted immediately to nat-gas, which will guarantee the infrastructure along every interstate as a start. Go T. Boone Pickens.

It doesn’t matter which engine technology is used either, a standard ICE or a split cycle. Nat gas is cheap; it’s clean; and we have abundant supplies of the stuff. It’s practically un-American to evade it and not to burn the heck out of it. And that’s exactly what’s going to happen over the next several decades, according to many investing analysts.

Investors realize that each situation of low prices and high supply sows the seeds of higher and higher consumption. Thus they believe, if you get in now with the proper investments, you’ll set yourself for big benefits in the coming years.

It seems strange, too, that the major oil companies like Exxon are also investing heavily in natural gas and the transport of it with a new fleet of LNG tankers. What do they know that the U.S. auto industry does not know?

Will all the power plants be converted to natural gas? That will take some time for sure. And EVs have along way to go to make a dent in the vehicle population.

In the meantime, with sluggish economics in place, the general public will not be able to afford expensive dual-propulsion systems like hybrids either. So, the auto industry is still not as advanced in their forward thinking, despite all the marketing hype at 2011 Detroit Auto Show.

-----------------------
About the Author: After 39 years in the auto industry as a design engineer, Frank Sherosky now writes articles, books and ebooks via authorfrank.com, but may be contacted here by email: [email protected]

If we want to use natural gas to transport people, we should be switching to EVs.

Using EVs decouples the vehicle from the energy source. When considering all of the trouble of upgrading the vehicle fleet to a new fuel, electric makes the most sense.

Once we've made that jump, we can stick with that for the foreseeable future. Electric cars are the only kind which get cleaner with age.

Also, burning natural gas in a combined cycle power plant, and using that to charge up EVs is more efficient then burning the gas in the vehicle directly. So the best way to use natural gas for transport is more EVs and an infrastructure of fast charging stations.

Firstly, I am a big fan of nat. gas vehicles and I have no desire to argue with the author about their benefits. However his treatment of EVs needs to be considered carefully.

The is no reason to try to tear-down EVs in order to build-up nat. gas vehicles. The readers should be told that EVs produce less CO2 per mile than a Prius even if the EV is only powered by coal. Also EV produce much less CO2 per mile based on the typical way electricity is made in this country. Furthermore, as more Renewables are added to the grid it gets cleaner.

EVs can run off of electricity made from any source, coal, gas, solar, etc, and therefore provides great flexibility.

While I appreciate your reporting from the auto show, the whole "coal power source" argument is used ad-nauseum to discredit electric cars. Do some research before you re-publish such tired, incorrect claims.

Many studies have shown that the efficiency of coal power generation is cleaner than distributing gasoline and burning it in millions of tiny internal combustion engines. Here's one such study.

Please supply the data source for your assertion.

That file above is from the Energy Information Administration....

Even with that, COAL IS LESS THAN HALF OF US ENERGY GENERATION

Want to guess where the most electric cars will be sold for the foreseeable future???

COAL, you misinformed "journalist" is less than 2% of California generation.

Before you broadcast your ignorance, do some RESEARCH.

The total for Coal and Nuclear is 65.2% Your blithe essay has me fuming so i typed it in wrong.

Really.....natural gas is fine....but you can do that at either end of the consumption pipe, centrally or at the car. I support CNG cars, I would be happy to have more of them, but let's not inaccurately portray EVs as anything less than a very big improvement. To do otherwise is simply incorrect.