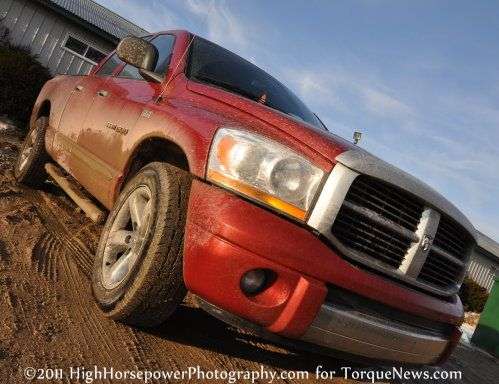 The U.S. may have become the world’s largest producer of natural gas, but it will take the smaller manufacturer, Chrysler Group operated by Fiat SpA, to bring it to fruition in the Ram truck brand.
Advertisement

Question is, where are General Motors, Ford and Toyota on this clean burning energy issue?

Most likely pandering first to commercial fleets and letting the rest of us pay for the higher priced tech, when dual fuels are feasible, especialy for trucks.

It’s a sad state of future vision, too, when Pakistan is #1 in the world with the most nat-gas filling stations.

Furthermore, Honda was only automaker at the 2011 North American International Auto Show with a viable nat-gas offering for automobiles.

Problem is, light to heavy trucks are the real gas guzzlers in America. So, why not use nat-gas in that segment?

According to a Bloomberg report, Phil Gott, an IHS Automotive analyst in Lexington, Massachusetts, said in a telephone interview last month that a lack of fueling stations in the U.S. limits the market to fleet vehicles in the near term.

I have another view on that: What about the millions of homes with natural gas? Imagine those as filling stations. If we can wait for our EV to be filled at home, then why not a natural-gas truck?

In a separate interview with Bloomberg at the Chicago Auto Show, Fred Diaz, head of the Ram brand, said, “I’m eager and very interested to see what we can do with CNG in our truck applications.”

I’m eager, too, and have been for some time. For the record, there was talk at GM about nat-gas for trucks a few years ago, but, as usual, it fell to the axe or got placed on a shelf in product planning. Perhaps GM wants to use their new HCCI or High Compression Combustion Ignition. If that’s their plan, they’re not talking.

Patrick Rall, writer for TN and photographer, told me he drove nat-gas vans when he worked at the University of Pittsburg.

He said, “We had a fleet of NGV vans. They were seamless. In fact, no one could tell the difference between the NGV vans and the gasoline vans, and this was in the late ‘90s.
Chrysler had a very functional technology in their shop; I drove them a ton. They were the older 5.9L V8s, but they effortlessly hauled around these 15 passenger vans; and did nice smokey burnouts.”

Of course, he laughed out loud at that one.

I noted the issue is the lack of public stations, but pointed toward the homes, although lower pressure filling.

Patrick responded with his main point by saying, “These vans operated in every other way like a gasoline van with the same engine.” That's significant.

If Patrick Rall has a preference, though, it would be engines that run on 130 octane jet fuel. He likes his Mopars.

Back to cleaner fuels for IC engines

Fiat is already the market leader in Europe for engines using compressed natural gas, or CNG. It has an 80 percent share of CNG-powered cars and 55 percent of light commercial vehicles. For the record, Fiat holds a 25 percent stake in Chrysler.

Sergi Marchionne, chief executive officer of both automakers, has said natural-gas engines are an attractive way to cut emissions, because they’re cheaper than competing technologies.

That part of the criteria seems to get lost when you talk to government officials. People need to be able top afford these greener technologies. Not everyone makes high salaries with 50% bonuses like some in the auto industry.

For the record, Marchionne made an announcement with DOE a few weeks ago regarding a hydraulic hybrid for future vans. You have to like how this guy thinks.

In my opinion, he’s much like Bob Lutz in that when he appears and talks, people gather to listen. And that’s what’s missing with these ultra-degreed business heads at automakers these days - lack of guts to voice their vision.

My own ideal engine setup for the future is a Scuderi split-cycle air hybrid that runs on natural gas! That way I can be greener, sip less gas and still keep my engine roar as I burnout; well, perhaps not as loud as Patrick’s jet fuel car.