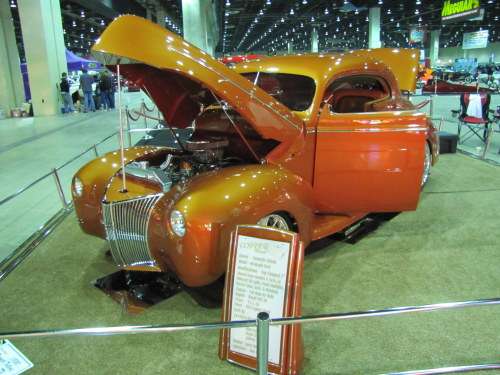 Autorama 2011 officially opened in Detroit today for public viewing, and the officials announced the Pirelli Great 8, the finalists for the coveted Ridler Award.
Advertisement

After viewing the entries last night during setup, I stated it won’t be easy this year with a field of 30 plus cars vying for the Ridler.

And, as usual, it seems the car you think has the greatest potential probably do not even make the Pirelli Great 8 Finalists list.

According to the Autorama website, the following are named among the Pirelli Great 8. Congratulations to the owners.

My own immediate favorites centered on the deep red 1937 Ford. It just looked so clean, but the criteria is tougher especially beneath he surface. If the car, for example, has been viewed at another show, that disqualifies it automatically from earning the Ridler.

There were others that I viewed last night, like the orange-painted pickup truck, followed by the 32 Dark Knight 32 roadster, the 1951 Business Coupe, the ‘32 Ford 3-window coupe called FNKool.

Funny thing this year is that there isn’t a single ‘32 roadster that made the cut. Amazing! But the competition this year is tough. And it’s nice to see other vehicles getting a shot at the Ridler.

As I reported this morning, the award emphasizes three elements as criteria for the judges: Creativity, Engineering and Workmanship. And anyone who forgets those three elements should not even bother participating.

So, those who did not make the cut obviously forgot one or two of those; or the others simply met the criteria at a higher level.

I have to admit that Entry #1600, Bruce Ricks from Sapulta, OK with a 1956 Ford may hold a lot of favor. That 427 SOHC engine is a beauty; so modern and clean in the engine compartment.

Another Entry #0305, Mike Lethert from Roseville, MN with a 1939 Ford Convertible is a contender.

Entry #1000, Tim Gunsalus from West Alexandria, OH with a 1947 Chevrolet Pick Up appears to be the same color, sea foam green, that missed the award last year. There’s just something familiar about this entry that might give it an edge. In fact, I included it in my video in the previous article, Autorama 2011 setup night shows field of 30-plus Ridler Award competitors.

Well, all of the Great 8 are officially contenders. Now, the judges will be able to focus on a smaller group and be able to hear the presentations by each owner as to why their car is worthy of the Ridler more than the rest.

I’ll follow-up here with pics in a gallery once they get processed.