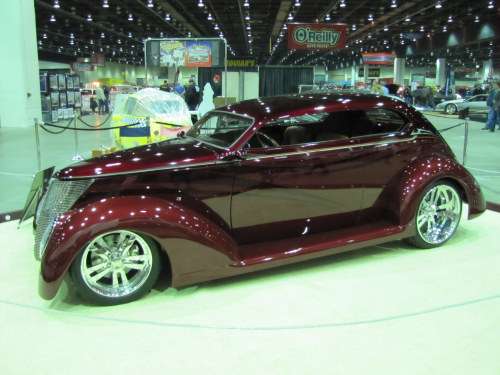 Autorama 2011 opens Friday, February 25, but setup has been ongoing since Wednesday, including a new field of vehicles all competing for the coveted Ridler Award.
Advertisement

It won’t be easy this year with a field of 30 plus cars vying for the Ridler. (See video below). It seems the car you think has the greatest potential may not even make the Pirelli Great 8 Finalists.

My own immediate favorites centered on the deep red 1937 Ford shown in the pic and in the video. It just looks so clean.

Then there are others, like the orange-painted 3-window coupe, followed by the 32 Dark Knight 32 roadster, the 1951 Business Coupe, the ‘32 Ford 3-window coupe called FNKool. Not all are in the video this time.

Those chosen to make the cut for the Pirelli Great 8 Finalists will be noted publicly, most likely by Friday night.

As of last night, though, the last night for setup, the judges had their work cut out for them. I was shocked when one of the coordinators told me the field this year, again, was over 30 cars.

According to the show’s website, www.autorama.com, the award emphasizes three elements as criteria for the judges: Creativity, Engineering and Workmanship. And anyone who forgets those three elements should not even bother participating.

Still, it behooves anyone entering a car into any car show to use that criteria as a guide. It may not win you a Ridler, but you will get noticed and you may even receive one of the private awards.

This is my first-ever report for TorqueNews using the video format. The process is a bit convoluted, but it’s the information that is still the most important element. I took a few clips of vehicles that caught my eye. Hope you enjoy them; better yet, attend the show if you can.

I will be going back to cover the Pirelli Great 8 and the final pics of the Ridler winner on Sunday night.