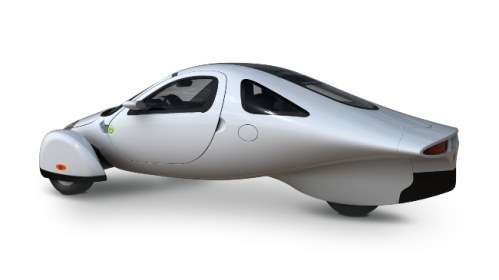 When Aptera announced it was planning to look beyond California to find an ideal location for its production facility of its revolutionary 2e and other electric vehicles, few realized that the Midwest would end up on the list.
Advertisement

Aptera’s recent email revealed the company had hired Cassidy Turley, a leading commercial real estate firm with experience in 21 national markets, to perform the search process east of the Mississippi. The team consisted of Jeff Bender from the Cincinnati office leading the real estate search, Tim Monger from the Indianapolis office leading the state and local discussions, and Dennis Visser, Arick Stark and Andrew Ewald from the San Diego office who are co-leading the master planning of the state-by-state review.

As a result of that input, Aptera management has had discussions with a number of state and local officials throughout the United States. As of today, the exploration has been narrowed to locations in Michigan, Indiana, Ohio and Wisconsin.

Of course, I think my home state of Michigan is the better choice. That should come as no giant surprise to those in the Midwest either, as the state may have been hit hard by the economic downturn, but is still super rich with knowledge, manufacturing talent and experience.

A major piece of the criteria can also be found in these Midwest locales: close proximity to railroads / rail loading facilities, freeways and airports, which are situated near an array of major automotive supply companies that Aptera has already partnered with for the development of their vehicles.

Additionally, state policy makers have offered attractive support packages that will enable Aptera to provide first-rate training to its workforce and to quickly begin assembly operations.

According to Aptera Vice President, Operations Dave Oakley, "Between our corporate headquarters in California and our Midwest assembly facility, we are going to bring nearly 1,500 new, clean technology jobs to areas that have been hard-hit by the changes in our economy. Collectively, we'll all work to build the world's most energy efficient vehicles from the ground up."

One look at the Aptera 2e and you know it is revolutionary from the ground up. The first feature you notice is its stance; it has three wheels.

The second element is it aerodynamics, with a drag coefficient less than Lance Armstrong on his bicycle. Shaped by the wind, the ultra aerodynamic, all-electric 2e gets the equivalent of more than 200 mpg with a 100 mile range; plus it has a shared purpose with the environment.

The alluring architecture promises a transportation experience like never before… a serene, exotic appeal integrated into a secure driving sanctuary that flies by gas stations to establish an affirmative impact on the world. The reason is simple: 50% of an average car’s energy is used pushing air out of the way at a rate of 55mph.

And just like a linebacker poised for the blitz, the Aptera takes a wide, three-point stance that makes the vehicle very stable, yet very agile. Push on the throttle, turn the wheel and the Aptera's neutral chassis carves through corners like it's on rails.

Furthermore, since the 2e is all electric, it is designed to charge overnight using your ordinary garage outlet (110v) so that it's energized and ready to start the new day with you.

I wrote here at Torque News that 2011 will be the year of Electric Avenue reality. The Aptera is another notch in that assessment.

Fact is, I have followed the Aptera before it became a part of the X-Prize competition. While I thought the three wheels might be a drawback to stability, it appears that is not the case. Still, at last check, I think it is still classified more as a motorcycle than a car.

Regardless, the idea of a full-electric vehicle for clean transportation coming to a Midwest facility is sweet. While many thought California was the place to be, truth is, the Midwest has proven once again that the region has far more to offer.

Its battery supplier, for example, is A123 Systems with a lithium-ion nano-phosphate configuration. At a curb weight of 1800 pounds, safety has to be a major consideration. However, by all the data this reporter has uncovered, this vehicle has to meet the same crash standards as any other vehicle.

The Aptera 2e may not displace the Chevy Volt and the Nissan Leaf or the Ford Focus EV, but it is a player in the EV market with enough panache that it will always turn heads.

I’m curious, though, as to the cost, as that will make it or break it among its contenders. If it is the same price as a Volt or Leaf, I doubt production will rise to anything significant simply due to its 3-wheel stance. However, the right price could be enough to make a real difference; moving the Aptera 2e into an enviable position as a commuter vehicle.

Tesla-Funded Research Reveals One of The Biggest Mysteries of EV Battery
Tesla Tesla Buyer Nets a Whopping $12,000 Discount After Asking for Reduction
END_OF_DOCUMENT_TOKEN_TO_BE_REPLACED