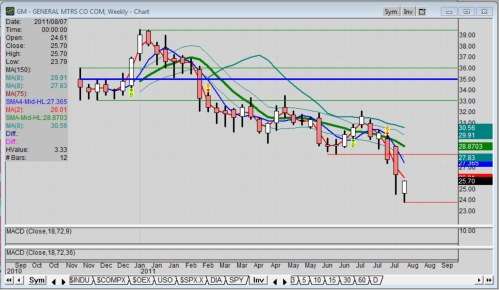 Investors in General Motors Company (NYSE: GM) stock wondered whether the price appreciation on Tuesday (08/08) was from the general market or the news from the 2011 Global Business Conference that the company would reduce vehicle platforms from 30 in 2010 to 14 by 2018.
Advertisement

Since morphing its operations as a new company in July 2009, General Motors Company (NYSE: GM) has definitely made good progress toward its goal of long-term sustainable performance, delivering six consecutive profitable quarters and improving global market share, while maintaining a strong balance sheet. Now as the the stock languishes (see weekly chart) well below its IPO price, GM is focusing on streamlining its processes for the sake of better margins.

“More of our components will be common, and more of our vehicles will be on global architectures,” GM CEO Dan Akerson told analysts today. His remarks came as GM kicked off a series of presentations online, billed as its 2011 Global Business Conference.

Fundamental news like this is usually the cause for most long-term moves in stock prices; but it doesn’t get much more fundamental than a drop in a national credit rating, followed by a FOMC announcement a few days later that it will keep interest rates low through 2013, just beyond the next election.

Question is, does today’s higher close with support at the new low of 23.79 define the beginning of a long or short-term bull pattern for General Motors stock?

This is something that GM has not always managed well in the past. For example, before the bankruptcy, it took me six years just to convince engineering management that reproducing the same design criteria data in CAD files for each program was a wasteful venture. So I invented Inherent Criteria, the meta-data that stayed with each reusable part CAD file. When the part was repositioned in the body of the next architecture or the next vehicle within the same architecture, so followed the 3D criteria data.

This followed suit for reuse items like shifters, steering wheels, radio, HVAC controls, switches, etc. The idea was to build it once, then attach it to the part digitally so that it would be reused around the globe. In the meantime, the company lost $1.92 million per year while it decided what to do.

Another area for improvement is program churn. That’s where the company spends time designing a vehicle almost to the production design stage, then cancels the program. All the man-hours are lost, not to mention the time reorganizing the teams within the matrix, including transferring personnel to other parts of the globe. Sometimes, the program merely goes to another part of the globe where it is likely redesigned to suit regional requirements.

Many do not realize how much consolidation aimed at eliminating inefficiencies in GM’s product-development system can contribute to the bottom line. Good news is, GM is now coming alive with a new mindset when it comes to margins; and that’s good for the long-term view of the stock.

Nonetheless, the general market and perception can drive a stock to heights as well as depths beyond reason. That's the power of emotional investing.

For sure, the stock has not done well since its IPO in November of 2010. The new low at 23.79 is now significant support that can and might be broken given a market inclined to discount all assets. Recall that an earlier article by me noted no techncial support based on previous price dynamics existed at all below the IPO price of 33, except for percentages of the IPO price, or squares of the book price. Read Will General Motors stock now test the June low?. Well, GM stock not only tested the June low but broke it handily. Hopefully for GM stock investor's the fundamental news on Tuesday can overcome the next wave of malaise after the emotions wear off.

Post Market Update: While the close was 25.54, post-market trading as measured at 18:08 did not deviate but a few cents from that price.

Wednesday, 08/10 Market Open Update: GM opened lower at 24.77 as the futures were once again toward the downside.