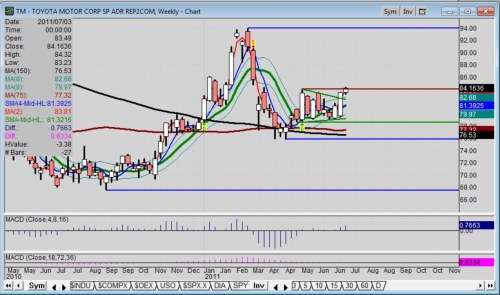 Can the 2012 Camry plow Toyota stock above its recent price channel?

It wasn’t that long ago that Toyota Motor Company (ADR: TM) stock was trading on the lower end of a 16-week channel. Now the stock has broken the early May high of 84 by closing just above it at 84.16. Could it be the breakout to higher highs? And is it the result of all the 2012 Camry news on the web?
Advertisement

Not all news directly affects a stock. Some good news gets a stock trounced, while bad news can be ignored. It’s hard to tell on this one, but the mood for Toyota stock has definitely improved.

Using the weekly chart for a trend bias evaluation, Toyota Motor Company (ADR: TM) stock looks like it is clearly trending well, and has been for the past several weeks.

Still, some are wondering just how much of Toyota’s stock move is directly related to the 2012 Camry news. It is scheduled for release in the fall; and inquiring minds want to see what it looks like.

That’s good from a marketing perspective; and may be good for stock expectations.

Perhaps that explains why the web is on fire with 2012 Camry expectation reports and spy photos everywhere, especially after Akio Toyoda released a peak of the front headlight, confirming the shot taken in May at least in that frontal area.

For the record, Torque News correspondent, Patrick Rall, literally scooped most of the big media folk on Google searches by reporting on this one. [Link Update: The 2012 Toyota Camry leaked in video and pictures ]

Back to Toyota Stock

Auto sector investors know Toyota has had many problems with quality. And the hope that it will get its mojo back certainly would have an impact on future earnings expectations.

Still, that tsunami and power outage did a lot of damage to the quarter. Yet, investors act like that was then and this is now. Hard not to agree with that.

From a technical chart perspective, Toyota stock still has major overhead resistance at 93.90. That’s quite far from the present close of 84.14. If I knew TM was going that high, that’s a no-brainer trade. Problem is, astute traders need confirmation of the breakout.

What we need to see is a number of closes above 84, especially on the weekly chart. This chart is still in progress. Let you know by Friday’s close.

For price support we have the June low of 79.03, which is slightly higher than the low of May at 78.62. That is close enough to define a double bottom, followed by the April low of 75.85.

Back to the upside resistance. Between the weeks 3/6 and 3/20 there is a price gap between 84.76 and 84.28. From a technical perspective, that needs to be filled and broken higher to confirm a breakout to the upside.

Some would caution that TM will likely pause when it fills that gap.

As a trader, I often pay attention to setups like that. Question is, will that 2012 Toyota Camry be enough news to empower the stock through that gap? For sure, media momentum seems to be on Toyota's side. [Market Close Update 7/7/2011: TM closed at 84.64, still within the gap]