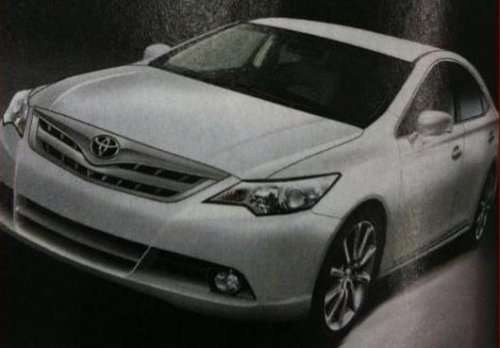 The 2012 Toyota Camry leaked in video and pictures

Last week, Toyota President and CEO Akio Toyoda offered up a 44 second video which presented us with what the company-head proposed as the next Toyota Camry and now we have video and a picture that appears to be the next 2012 Toyota Camry – but something doesn’t seem quite right.
Advertisement

The black-and-white image of what we are led to believe is the 2012 Toyota Camry (shown on the right courtesy of Toyota-Alabama.com) shows a very sporty, fairly sleek sedan that could most certainly fit as the next Camry. Had Mr. Toyota not issued his brief video last week then there would be little doubt that this colorless image is indeed the next Camry but if you look closely at the car that the Toyota CEO teased and this new leaked image there appear to be some obvious differences.

Unfortunately, the only components that we have to go by in comparing two images of what could be the 2012 Toyota Camry are the headlight assembly with its relation to the hood, grille and fender line. In the image captured from Mr. Toyoda’s video (click here for a better look at the official Toyota company video), the front edge of the hood runs at an almost flat angle along the majority of the headlight housing, with the corner of the hood meeting the headlight towards the outside edge of the lens. However, if you look closely at the black and white image, the hood “ends” just past the inner edge of the headlight – looking like it leaves far more space between the side of the hood and the spread of the headlight. In short, the car teased by Akio Toyoda has a headlight that appears to share more of a border with the hood where the leaked image of the next Camry does not.

What does this mean? Well, both images could be of the 2012 Toyota Camry with the clearly more aggressive vehicle in black and white perhaps being a sportier or special edition model. It could also be that the B&W image is a rendering done by an eager enthusiast or these could be identical vehicles with a healthy dose of camera angle tricks performed to keep us all guessing.
The good news is that the 2012 Toyota Camry has also been leaked in a short YouTube video showing the new sedan in red, black and white at what appears to be a dealer sneak peak. Unfortunately, the video is shot with a cell phone from a healthy distance from the stage and when you combine that with the tricky lighting and copious amounts of glare, it is hard to decipher any of the details. However, from what we can see it looks like the cars on the stage (in the video below) more closely resemble the square-ish headlights teased by Mr. Toyoda. Check out the video below and let us know what you think in the comment section below!