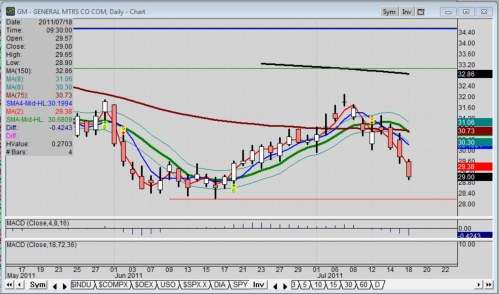 With the general market reacting to news of a potential breach of U.S. debt confidence, General Motors Company (NYSE: GM) stock, which is nearly nine months old since its IPO, is once again making lower lows and lower highs on the daily chart. The price chart also indicates the stock may be attempting a retest of the June low of 28.165.
Advertisement

Regardless of the real cause for the sell-off of GM stock, new investors need to be aware of the price swings that provide opportunities for better entries.

For the record, the IPO offering for GM stock at 33 and the open at 35 has yet to be reached since the sell-off that broke those levels many months ago.

For sure, this reporter in early July noted the chart pattern for General Motors (NYSE: GM) stock was looking stronger since its new lows in June. Well, all things come to an end; and so did the up-swing.

Question is, is there a fundamental reason for the GM stock selloff?

For the record, GM is reorganizing once again (no surprise there) but this time within the Global Product Development. See my earlier TN article, “GM rearranges deck chairs in global product development”

On the product side, the GM lineup still looks strong, but sales will be subject to the ability of the general public to afford the financing.

The stock is also way below past price support at 33 which is now viewed by market technicians as serious overhead resistance. This change in status occurred when past price support was broken. For the record, even the legendary trader, W.D. Gann, viewed broken support in this manner.

Recall that GM stock was initially offered at 33, but opened higher in November, 2010 at 35. It later traded as high as 39.98 then trailed downward for months to break all IPO price support. It even broke past 30 and made a new low of 28.165 in June. That is the level to watch!

Of course, GM stock is driven by the general market as most stocks are. In this case, General Motors stock is not showing any rogue attributes either up or down. It seems the emotions of traders, especially hedge funds who often wield large blocks of shares, are leading the charge; and GM stock is following the crowd.

Where does GM stock go from here? As far as direction goes, follow the crowd. As far as distance, the chart pattern seems to indicate the June low is a target simply because it is strong support and confirmed as a lower limit. The fact that the price pattern showed strength to the upside just before this latest down move tells us the June low is indeed confirmed as support. Time will tell, though, if and when it holds.

Should you scalp GM stock? Not my call, that’s your decision. I’m merely pointing out the possibilities from a technical analysis perspective.

But before that ever happens, the swing high of 32.08 has to be breached. Any market technician will tell you, though, that it is significant to note how a stock reacts at support and resistance levels. This case is no different, especially as this recent low of 28.165 is likely to be tested first.