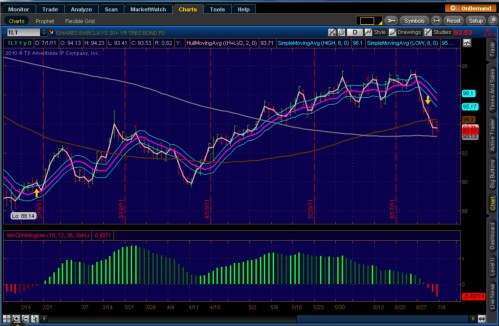 Is it time to protect your auto sector stocks?

It’s a fair question in light of the CNBC article which quoted Nautilus Invest for its decision to have zero exposure to stocks. Point is, auto sector stocks are especially sensitive to economic conditions, including sovereign debts and default potentials like Greece.
Advertisement

Now think back to 2008 where we may be approaching another condition Yogi Berra often stated as, Deja Vu all over again. In other words, yes, we've been here before; it's just been a while.

Then think of the potential for sovereign defaults. Albeit a new occurrence for this generation, even that has happened before, just not with so many nations. That is why, in a detailed article by CNBC, the quote by Bruno Verstraete, CEO at Nautilus Invest used key words, like “zero exposure” as he justified his position to dumping stocks.

Truth is, all of us function as both investors and traders. The only difference is the timeframe. The name of the game, even according to legendary W.D. Gann, has always been speculation; and every speculative vehicle must be protected.

In my own book, “Awaken Your Speculator Mind,” I wrote that it is impossible to manage risk. I wrote that you can only manage yourself and your assets relative to all the risk that is about you. Point is, I still stand by that position.

As a speculator, it has also been my philosophy to move my money whenever necessary. Sometimes, I’m spot on; other times I vacillate between early and late. Hey, it’s a judgment call. One thing for certain, though, buy and hold without protection has proven to be a foolish strategy.

One hint I gleaned by researching the Nautilus website was this: Their client base and contacts give them the opportunity to invest in exclusive financial instruments that allow them to differentiate with better performing investments.

So, question is, are there better performing assets out there? And if you insist on holding your auto sector assets, are there ways to protect them? Answer to both is, yes. Think getting out; think reducing positions; or think protecting with options.

Obviously, getting out now takes you out of harms way while incurring a transaction fee from your broker. Frankly, the fee is often better than a loss, in my mind. However, once out, your money will have to sit somewhere else; and the choices are not high on the hit parade.

Another way is more measured, as in a reduction your positions, or partial sell off. In other words, take some off the table. If you have owned auto stocks for the past 12-18 months, you are likely in a profitable position. In the words of CNBC’s, Jim Cramer, host of Mad Money, “Bulls make money; bears make money; and pigs get slaughtered.” Actually that’s an old Wall Street cliché. Oink, oink!

The next measured way is to protect your positions with put options. You can retain the stocks. You can even offset the cost of the put options by selling higher-strike call options for income.

These are viable vehicles that act literally as insurance. Selling a call option on a stock you own produces income. Buying a put option at a lower strike gives you the right to sell a stock into the future at a specified strike price, provided the stock price at expiration is even to below the strike price of the option.

For example, with Toyota Motors (ADR: TM) trading today near $83.00, buying an OTM (out of the money) September or October $80 put (strike) would have zero intrinsic value until the stock broke below the strike. If the stock trades above the strike price at expiration, the put option represents time value only which would then be zero.

Selling a July or August 85 or 90 call, on the other hand, would give you immediate income to your account. Of course, you want the shortest time whenever you sell a call; and you want to sell the call when the stock is peaking. Good news is, you can do this month after month and garner income like a dividend, especially if the stock is bound by a price channel.

Realize the further out in time, though, the greater the cost of the options. Likewise, the higher the strike, or the more the option is in the money, the option would then have both time value and intrinsic value.

Out of the money put options are by far cheaper, but all are dependent on volatility, and often the weapon of choice for stock insurance. Still, some bears prefer stock replacement by buying puts deep in the money to take advantage of every down tick. It’s akin to going short without having the risk of having to make delivery.

Now lest you think this is a crazy alarmist article, CNBC noted Verstraete had said he believed market volatility would continue in the second half of the year and a number of factors would continue to weigh, particularly a slowdown in the Chinese economy and disagreement over raising the US debt ceiling.

Neither of those will bode well for auto stocks, unless you develop a trading mentality, where you buy the low of a channel and sell at the high of the trading range. Not everyone likes that style, though.

Bottom line: Just don't sit there like a deer looking into the headlights. QE2 is over and bonds are implying higher interest rates. Just be prepared is all I'm saying.

LG's New EV Battery Plant Is a Welcome News for Tesla
Tesla Giga Berlin's New Hurdle: It's Not Only the Gov't, but Now Tesla Itself
END_OF_DOCUMENT_TOKEN_TO_BE_REPLACED