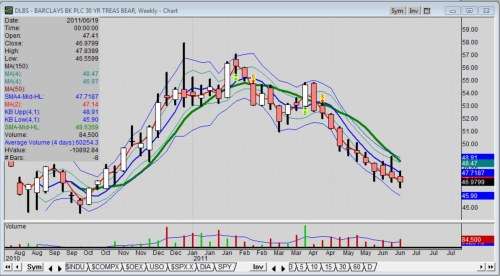 June 30, 2011 may be another date which will live in infamy for the auto industry as the Federal Reserve will end all buying and propping of mortgage back securities and bonds.
Advertisement

The weekly chart of the DLBS as a long bear ETN representing the 30 Year Treasuries may be a bargain at least in the short term for auto sector investors, IF the assessments of the scenarios caused by the end of QE2 are correct. [Full disclosure: this writer is neither long or short this ETN at the time of this writing]

In case you hadn‘t read it before, though, it was world-renowned bond investor, Bill Gross, who first said investors should view June 30, 2011, as America's new "D-Day," an occasion "fraught with hope for victory, but fueled with immediate uncertainty and fear as to what would happen in the short term."

Likewise, on Wednesday, in what The Wall Street Journal described as a "dreary" press conference, Federal Reserve Chairman Ben Bernanke confirmed the latest round of bond buying, the $600 billion QE2 program started by the Fed last year, will officially end on June 30th as scheduled.

Somehow, Gross’ use of the words “short-term” tends to invoke a flash event in my mind. Then again, I am fully aware, being a student of market history, that bear events can last many, many years. Look at Japan.

Question now is, will the end of QE2 have a major impact on the auto sector as much as your other investments? A few analysts don't think stocks are going to crash, but it's not unfounded to think of June 30th as a possible "tipping point," writes Bob Bogda in the email sent to me of his Street Authority Insider.

Fact is, putting a probability hat on, it’s not that hard to imagine the government having to begin paying higher yields to attract new buyers. That means interest rates will likely rise; and that will directly affect automotive financing as well as mortgage financing and refinancing.

But wait; there’s more! According to the U.S. Debt Clock, one of the most widely cited tools to measure our nation's ballooning debt load, the U.S. government owes $14.3 trillion to our creditors.

If that number truly equates to nearly $130,000 per taxpayer as some have written, we are in trouble in more ways than one; and the end of QE2 is merely a minor aspect. It’s disconcerting when, according to the Federal Budget released by President Obama in mid-February, we're currently on pace to add $1.65 trillion to our national debt this year alone.

Frankly, I do not care what others write or even where the opinions come from. My job as a writer here is to provide insight about effects on the auto sector for those who read TN and invest in auto stocks.

With that in mind, I must reveal and share my own concerns here. Fact is, I do not know beyond shadow of doubt what will happen exactly or how deep any sell-off may occur. I do, however, respect the laws of probability; and those laws are screaming in my ears to be cautious with my investing. In other words, trust but verify.

I do not recommend stocks here at TN, but I do highlight factors like charts, price patterns that may affect a particular auto-related investment. In full disclosure, that is why I am personally defensive in all my investments these days. I do not intend to ever fight the Fed; I have learned the hard way that it’s a losing battle.

Perhaps that is why Street Authority Insider touts the iPath US Treasury Long Bond Bear ETN (NYSE: DLBS) as a hedge, because it is a unique security that appreciates in value when Treasury rates rise.

I trade futures, options, stocks and commodities. I even own some very short-term bonds that are literally maturing this year; and just in time, as I had foreseen when I bought them in late 2009. As I look at the chart of the DLBS, I do not see any upturn of the bear ETN (Exchange Traded Note); nor do I see any hint of a bottom except it is reaching past price support when things turned ugly in October, 2010. So, buying it now might indeed be a bargain.

However, why would it be a bargain if the analysts are expecting the shoe to drop? One would think other traders would have jumped on it already. Then again, maybe they're trading other vehicles like futures and options which would not show up on this ETN chart.

Still, it was made clear to me when I attended the Detroit 2.011 - Autobeat Insider Conference this past week in Birmingham, Michigan that there is a distinct relation between the housing market and autos. Special thanks to Kim Korth of IRN Inc. for her astute observations. IRN is a boutique consulting firm that provides integrated market data, intelligence, and insight for and about suppliers in transportation equipment markets.

The fact that I witnessed Korth's two charts showing the housing market turning down again which was followed by a slightly-delayed downturn of the auto sector line has to make me, as a trader and speculator, pause and reconsider the latest bull move has likely run its course. Now add the end of QE2 to that assessment. Perhaps that DLBS is a bargain after all; perhaps it’s time for a downturn; but. again, I cannot tell you how far this leg will go or how long it may run.

If you believe Bill Gross is right as well, then just beware, be cautious. And be apprised that put options and bear ETFs can be your best friend when markets get cranky.