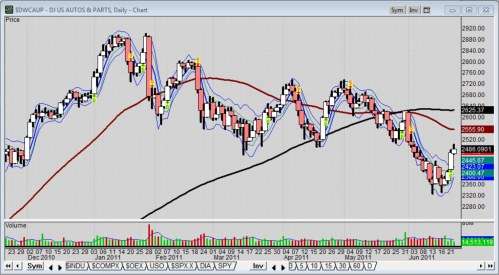 If you want to know what will affect the auto industry next, look no further than the response of the bond market to the Fed Chairman, Ben Bernanke's post meeting news conference.
Advertisement

It doesn’t matter what the charts shows today for the bonds, but what it will show once QE2 funding has offically ended. That’s right, the bond market will likely reset everything you have come to know about interest rates and its relation to the costs and sales including automobiles, as represented by the DJ US Autos and Parts ($DWCAUP).

Fact is, the cause for all the change is simple. There has been increasing domestic political pressure along with turbulent global economic conditions that will drive the Federal Reserve to let its massive bond-buying program expire in a matter of days.

Furthermore, the Fed has announced no new initiative to prop up the American economy, even as the central bank downgraded its economic assessment to reflect the sputtering recovery.

Some believe the Fed will have a QE3 or quantitative easing, but call it by some other name. Time will tell.

Either way, America will address its budget and debt problems or it will kick the can once more down the road.

In the end, though, the auto industry along with many other industries will pay a giant price. Suffer the pain now or later.

The good news is, corporate America, especially the auto industry, is in far better shape to handle a double dip should one occur.

As the Fed concluded its two-day monetary policy meeting, it said it would keep a key short-term interest rate at near zero for the foreseeable future to support the economy. However, policymakers agreed to allow a $600-billion program to buy U.S. Treasury bonds at the end of this month to lapse as scheduled.

There are two ways to look at this: Although both moves were adopted unanimously and were widely expected by economists and Wall Street investors, it means the end of a major monetary stimulus effort at a time when the economy is weakening. Furthermore, there is little chance of new large-scale economic support from the government.

Question is, will the net effect on the economy hurt President Obama’s reelection bid?

Still, many analysts have lowered their forecasts and remain worried about the economic outlook. After all, there is the prolonged weakness in the American housing and job markets, not to mention the more recent the turmoil over the debt-restructuring problems in Greece. Then add to the mix the political brawling in Washington over the federal deficit and the looming debt ceiling deadline.

One look at the DJ US Autos and Parts ($DWCAUP), which is not really an index but a collection of auto related stocks, you see it trading below its 150 day moving average.

Of course, my own channel system is signaling a short-term buy after the latest down leg. Question is, will the Fed announcement overcome the recent almost-bullish trip.

For the record, the Fed’s new outlook on the economy, inflation and unemployment rates were seen today when Chairman Ben S. Bernanke offered his own assessment of the recovery and laid out policy options in his second-ever news conference following a Fed monetary policy meeting.

As the press conference was scheduled to be seen live on the Fed's website, CNBC had three economists ready to rate the chairman.

Still, Bernanke mentioned that 2012 is expected to see economic growth. With that said, it would seem there is no need to support with anything like a QE3; and that will affect the bond market to raise rates which will drive up borrowing costs for already-strapped auto buyers.

Armen wrote on June 22, 2011 - 3:57pm Permalink
Very good analysis on how the end of the bond market and interest rate support will affect the auto manufacturers in the United States.