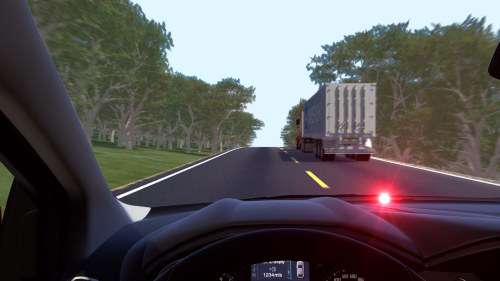 Ford Motor Company (NYSE: F) is rapidly expanding its use of SYNC® technology in a commitment toward intelligent vehicles that can wirelessly talk to each other.
Advertisement

This is merely one aspect of Ford’s four-pillar approach to Driver quality, Driver green, Driver safe and Driver smart. Now think of the ways Ford’s unique SYNC® technology and Wi-Fi capabilities can serve as a platform for future communications among vehicles.

Fact is, Ford’s vehicle communications technology already allows cars to talk wirelessly with one another using advanced Wi-Fi signals, or dedicated short-range communications, on a secured channel allocated by the Federal Communications Commission (FTC). The Wi-Fi-based radio system even allows 360 degrees of detection and can “look” around corners for potentially dangerous situations, such as when a driver’s vision is obstructed.

There are two ways to handle it, though. One way is to have the car do the action for the driver. The other is to merely warn the driver so he or she may take appropriate action. One iis expensive; the other is less.

All engineers know the best way to protect an occupant is to avoid an accident altogether. Using technology to alert drivers to approaching hazards is by far the most cost effective. Intelligent vehicles could warn drivers if there is a risk of collision when changing lanes, approaching a stationary or parked vehicle, or if another driver loses control.

Drivers also could be alerted if their vehicle is on a path to collide with another vehicle at an intersection, when a vehicle ahead stops or slows suddenly, or when a traffic pattern changes on a busy highway.

The potential in assisting drivers in hazardous situations is immense, especially at intersections where the view is compromised in one or both directions. If the vehicles are enabled to communicate, the vehicle approaching the intersection will be aware of another approaching vehicle, then alert the driver with an audio and visual alarm. For the record, I experienced this technology first hand at one of Ford’s tech drives; quite impressive!

Lane passing is another hazardous situation where intelligent vehicles can shine. See the image. Again, the view is often compromised. If vehicles are approaching from opposite directions especially over a hill, but enabled to communicate, they could warn the drivers of oncoming vehicles, potentially avoiding head-on crashes.

My least favorite driving situation is the blind spot, where a vehicle, likely a motorcycle is to your right and slightly rearward. It’s very easy to cut that person off. With Blind Spot Information System (BLIS®) by Ford, you get an audio and visual warning. Frankly, this technology should be standard on every car, in my opinion.

Then there is the proverbial stalled car in the middle of the road scenario. Again, the test setup by Ford test drivers proved to me the value of this technology by giving an early warning. Granted, the car did not automatically stop, but a solid warning was sufficent in my mind as a safety device.

Of course, when it comes to intersection communication with traffic lights, product penetration is crucial to the success for society; and that will have to include penetration of the technologies via the municipalities which are tight for cash unless they get it from the government. Still, Ford is partnering with other automakers, the federal government and local and county road commissions to create a common language that ensures all cars can talk to each other based on a common communications standard. Then talking with the road can be next.

When I asked a Ford tech in the test car when this might be available, she mentioned the government will make some sort of decision by 2013 on whether it will be optional or mandatory. Frankly, after my experience with the Ford technology, I prefer mandatory for my family.

Republican Girl wrote on June 22, 2011 - 4:15pm Permalink
It sounds neat and i hate to sound like a conspiracy theorist, but what makes us so sure this technology isnt being developed to report back on your usage - miles, gas, locations, habits - then you suddenly find a tax based on over usage or insurance goes up over needing that technology in a bad area. Aside from that, does it help or teach us to be less responsible depending on a car computer for what we should be doing? I'm not sold. But, on paper it sounds cute as a go-go gadget car. Personally, i would not pay a premium for it and i'll wait and watch from a distance in my 'dumb' car.
Orange County Ford wrote on June 28, 2011 - 4:44pm Permalink
I read that this technology can also be used to provide info to the police in case of an accident; it can record your speed, braking conditions etc. Plus it can also be used to "reserve" parking spots in advance. Republican Girl. I seriously doubt that it will be used for "over usage". Over usage for what? It's your car, there is no limit on how much you can use it. That's a bit paranoid.