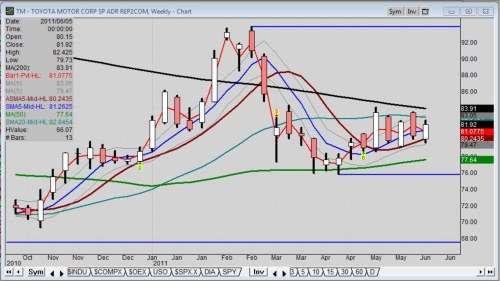 Toyota Motor Company (NYSE: TM) stock, despite the carnage of multiple recalls and a slowdown from the earthquake and tsunami, has strong price action within the recent market sell off.
Advertisement

The weekly chart shows price dynamics dating back to last summer with the blue lines representing points of price support and resistance. However, traders may want to focus on the price action over the past few weeks.

Despite sell off weeks, Toyota Motor Company which trades as an ADR in New York under the ticker symbol TM has shown itself robust enough to rebound each time. That’s bullish from a technical perspective.

A few days ago, TN writer Patrick Rall wrote in “Toyota requests dismissal of shareholder suits over unintended acceleration” that “the value of their vehicles and their stock plummeted. That tends to happen when a publicly traded company is caught hiding information that is costing people their lives so it really came as no big surprise.”

Despite the truth behind that kind of news that can surely affect the fundamentals and the bottom line, Toyota stock is still being treated quite well by investors. Yes, shocks me, too. It in no way devalues the news, though; just that reaction to news is significant from a trader’s perspective.

I agreed with Patrick at the time that the issue revolves around the alleged internal corporate cover up to protect the image built up over the years. (I wrote in comments) Still, as the judge is straining to decide, stock laws do cross borders to some degree, as they are the basis for equities which are directed to some degree via the exchanges. However, the trading public doesn‘t see anything dreadful; otherwise the stock would tank on the news, and it hasn’t.

As a trader, I inspect the chart patterns to find support, resistance and trend bias. The article benefits those who want to understand the fundamental reasons behind the price moves. And when the market reacts well to bad news, that is significant.

Fundamentals, news and reaction to news followed up with price action analysis can be a great formula for stock-trading success. Regardless of your own trading style and preferences, you still need to be an informed trader from all aspects.

So, look again at the stock chart. Notice the major overhead resistance is at 93.90. Likewise, major price support can be found at 81.15. Within that band, though, the weekly high of 84.00 needs to be broken on a close basis before any challenge of higher resistance can be made.

I cannot tell you where TM will be next week, but its strong price action within 6 straight days of down general market action says demand for the stock seems strong. Besides, an up week streak within a down week general market says it even better.