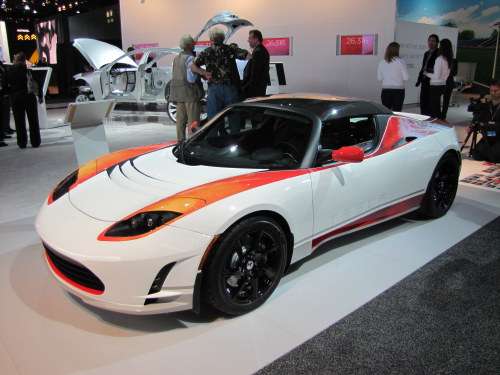 In a preemptive move, Tesla and Toyota are innovating their way around future rare-earth material shortages induced by threats of production cutbacks in China.
Advertisement

A recent Boomberg report noted Toyota is already in the advanced stages of using an induction motor designed by Tesla that does not require rare earth materials for its new hybrid cars.

This is reminiscent of the World War II days when control of rubber supplies were being used as a weapon. America responded by using its innovative powers to develop synthetic rubber.

In the meantime, Molycorp Inc. (NYSE: MCP), whose IPO last July has tripled, is the only American company with the potential to rival China in rare-earth mining. It was recently interviewed by Bloomberg’s Inside Track. According to the video, the company plans to double rare earth production by 2012.

Furthermore, lawmakers are seeking to revive U.S. production of the minerals used in products from “smart” bombs to wind turbines and mobile phones.

Still, Toyota and other companies are hedging their bets by depending on technical alliances and nano-scale research to avail new opportunities. For the record, rare earth minerals are found in magnets that power electric cars and hybrids like Toyota Prius, Nissan Leaf, Chevrolet Volt, as well as cell phones, wind turbines and hard drives.

As the need to replace rare-earth minerals used in a number of clean technologies and consumer electronics expands, more alliances between tech companies will likely flourish; as it is has between Toyota and Tesla.

One vehicle in particular, Toyota's electric RAV4, will use a special Tesla induction motor that is rare earths-free. Fact is, Toyota paid Tesla $60 million to help develop the motor, which is similar to the rare-earths-free technology in Tesla's all-electric Roadster sports car and 2012 Model S sedan.

The tactic has a side benefit as well; meaning, it could put Toyota and Tesla ahead of the motor technology curve, especially if rare earth prices soar out of control as some analysts fear.

Actively preparing a contingency plan to keep supply of its green cars stable should things rare earths shortages get worse is more than just wise management; it‘s a tech-based philosophy that says nobody, including China, is going to hold green cars hostage in America.