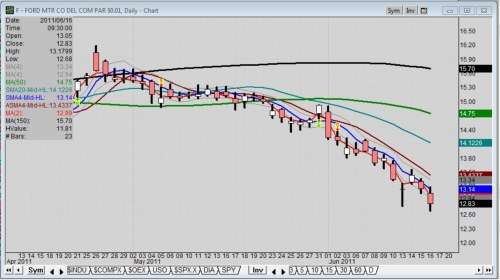 Despite an April sales report that showed an increase of 16 percent versus a year ago and year-to-date sales up 16 percent, Ford Motor Company (NYSE: F) stock has since trended with lower lows and lower highs.
Advertisement

While my report of 5/3 showed the monthly chart with its macro view of Ford Motor Company stock performance, today’s daily chart shows a great picture of bearish trend bias since April.

Yet, while the fundamentals for Ford look good compared to years previous, the rumblings on the horizon, like $4-plus gasoline, has affected Ford stock but not as much as the general market malaise. Still, Ford doesn’t seem bothered, at least in the press.

“With gasoline prices eclipsing $3.90 a gallon, consumers are placing an even higher priority on fuel efficiency in every size and kind of vehicle,” said Ken Czubay, Ford vice president, U.S. Marketing, Sales and Service. “Ford’s plan to lead in fuel efficiency is saving our customers money at the pump and helping us to profitably grow our business.”

In defense of Ford’s position, the company does offer 12 vehicles that lead their sales segments in fuel economy, including four vehicles with EPA certified 40 mpg or higher ratings – a claim no other full-line automaker can match.

Problem is, all automakers come short of 40 mpg for the city driving; and that will become obvious if gas prices go even higher.

For the record, automaker numbers always refer most to highway driving, where efficiency is highest. To compete with the 40 miles per day criteria established by the EPA for plug-in electric vehicles, the industry is still behind the needs of consumers.

Think about it. At 40 mpg and a 40-mile per day average, and using $4.25 per gallon times 30 days, that totals to $170 per month, not counting cost of the car financing and insurance. As I have written before, all automakers come short of the glory of their press rants.

On the Stock Technical Note

Investors vote with their money. Ford stock has traded up to a new high of 18.97 this year from the late 2008 low of 1.01. In early May the closes were in the $15 range which also defined price support at the 50-day moving average but above the monthly swing low of 13.75.

Investors have now shown by their stock purchases (or lack thereof) how much they believe in Ford’s ability to grow future profits. With the stock now trading at 12.83, that is quite away below the 50-day moving average of 14.75.

Now, some may ask why I use MA150 today as opposed to the well-known MA200. Well, a market technician on CNBC’s Fast Money program noted that statistics prove the MA150 to be a bit more reactive. So, I checked it out. It appears any flattening of the line, let alone a rise or fall, has great significance; and entails the probability of a change in trend. Thank you, Mr. Carter Worth of Oppenheimer.

Cause and Effect Stock Assessment

If you are looking for the main reason Ford stock has been indeed languishing lately, consider the general market. It, too, is in malaise; especially now that Greece is affecting the Euro which is affecting the USD and banks again.

Technology or lack thereof is not a major problem at this time. Still, with all respect to Ford’s technology gains these past few years, the EcoBoost engine technology with all its increase in efficiency is still no match for $4-plus gasoline and a high unemployment rate. And neither is GM, Toyota, Honda and Hyundai’s engine technology, in my opinion.

On the global business hand, Ford has aggressive growth plans in China that will double the size of its professional workforce there by 2015, adding 1,200 new jobs. They are behind GM in this area.

So, regardless of the cause of the stock slide, the net effect is: investors are simply unwilling to pay up for Ford stock at this time. Next price support is at 10.95 and 9.75 per the charts. That means only the chart technicals can tell us where that slide might end, but it will still take big money to change the trend bias act as the catalyst.

-----------------------
About the Reporter: After 39 years in the auto industry as a design engineer, Frank Sherosky now trades stocks, futures and writes articles, books and ebooks like, "Perfecting Corporate Character," "Awaken Your Speculator Mind", and "Millennial World Order" via authorfrank.com. He may be contacted here by email: [email protected]
________________________________________________
Additional Reading:
Ford releases its annual sustainability report
The Ford Mustang plant could be in trouble
GM stock breaks to new low, the 6th in past 11 days
General Motors Venture LLC to invest $6 million in Protera Inc.

Anonymous wrote on June 16, 2011 - 9:46pm Permalink
It's obvious to consumers that this "making more profit" game that Ford is talking up is simply them marking up their vehicles too high, that is why the stocks are trading lower, same of habits coming out of Detroit, just a different suit.