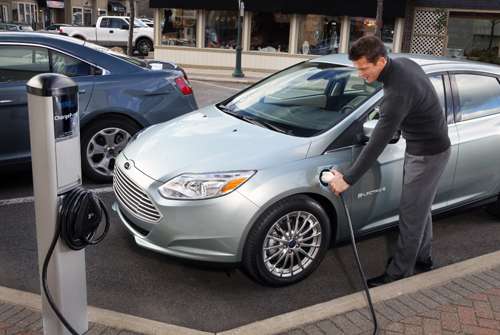 Ford presented the public with its 12th-annual sustainability report yesterday, addressing its plans to reduce CO2 emissions and water usage in the future, as well as improve passenger safety.
Advertisement

Ford's annual sustainability report was released yesterday, ensuring the public of its concerns for the environment and passenger safety. The report focused primarily on reducing its CO2 emissions and its water usage as its goals for ecological protection, and discussed its continued development of technology like car-to-car communication in the interest of accident prevention. Titled "Blueprint for Sustainability: Driving Change," the report gave specific targets of where Ford wants those figures to be and the timelines in which it wants them to be there.

Ford released several statistics in the report of the progress it had already made. In terms of environmental preservation, Ford said it had reduced CO2 emissions from 2010 model year cars by 10.5 percent in the US, and 8.1 percent in Europe, compared to the 2006 model year, while it also reduced CO2 emissions from its global operations by 5.6 percent per vehicle it produces compared to 2009. Ford's first 100% fully-electric vehicle, the Transit Connect Electric, and its recent announcements of the C-Max hybrid and C-Max Energi plug-in hybrid were also mentioned in the report as part of Ford's pledge to upholding these commitments.

Ford's interest in safety was presented in the report with awards for the 2011 Fiesta from IIHS as the first Top Safety Pick in the subcompact class, as well as the 2012 Focus, which earned its own Top Safety Pick award and a five-star safety rating in the European new-car assessment program. Ford has also invested $1 million worth of expansion to its Driving Skills for Life teen-driver education program, now bringing it to 15 US states, up from 9.

Ford's future environmental goal is to reduce CO2 emissions from its global operations 30 percent per vehicle by the year 2025, and as its biggest sustainability concern, Ford plans to reduce water consumption during the manufacturing process by 5 percent per vehicle by the end of the year. Its future safety goal is the synchronization of technologies like GPS, WiFi, and cellular phone networks to work toward the development of a smart grid, where cars can communicate with one another to avoid accidents, and also to reduce traffic congestion.

This is Ford's 12th-annual sustainability report, and help for drafting it came from Ceres, an independent group of investors that conduct business operations with environmental and social concerns in mind.

Anonymous wrote on June 17, 2011 - 8:52pm Permalink
i read the mustang gt produces .9 lbs of co2 emissions per mile . the camaro ss produces 1.9 lbs per mile twice as much and we bailed them out with money they want pay back.