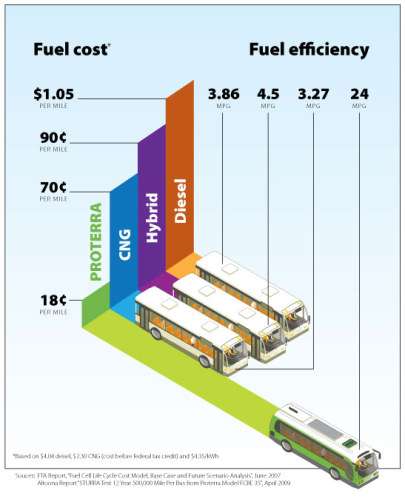 As part of a $30 million package to commercialize technology, including a rapid-charging transit system and other next-generation technologies that support innovation in the global transportation industry, General Motors Ventures LLC will inject $6 million, a 20 percent of the total stake in Proterra Inc., a leading maker of zero-emission commercial transit buses.
Advertisement

At first, this investment may seem strange since General Motors company (NYSE: GM) once built buses under the GMC Motorcoach brand. Since the bankruptcy, though, GM has had to divest itself of companies like it, includiing Allison Transmission, Detroit Diesel and other ventures.

According the latest GM news release via media.gm.com, the game appears to have changed. GM Ventures is part of an investment group, led by venture capital firm Kleiner Perkins Caufield & Byers. Together they will invest a total of $30 million in the bus manufacturer.

“This equity investment further demonstrates GM’s commitment to electric propulsion and supports our commitment to identify and invest in technology solutions that help advance the global transportation industry,” said Jon Lauckner, president of GM Ventures. “While this investment will help Proterra commercialize its electric bus and fast-charging technology, it also helps to address the future challenges of urban mobility.”

Proterra Inc. was founded in 2004 and is currently manufacturing buses in a temporary plant in Greenville, S.C. near Clemson University International Center for Automotive Research.

For the record, Proterra’s EcoRide™ BE-35 battery electric bus is averaging up to 24 mpg (diesel equivalent) in service, a more than 600-percent improvement over a typical diesel bus. Using technology developed by Proterra, the lightweight, composite-body bus recharges in about 10 minutes.

Three EcoRide BE-35 buses are currently in a test fleet near Pomona, Calif., with additional buses to be added, and new buses and charging stations are also headed to San Antonio and Tallahassee, Fla., later this year. This investment allows Proterra to complete federal validation testing of its bus, roll out additional pilot fleets and complete initiatives to significantly reduce costs and increase volume production at its Greenville, S.C. manufacturing plant, which will have the capacity to produce 400 buses annually.

With up to a 40-mile range for the under 10-minute fast charge application, the EcoRide BE-35 can easily replace 80 percent of diesel buses in typical transit and shuttle use without altering schedules or passenger service. The EcoRide can also be configured for longer ranges while charging at a central location.

“With the support of GM’s automotive expertise and technology leadership, we can achieve a better, cleaner future for public transportation,” said Jeff Granato, president of Proterra. “We are proud to have General Motors on board.”

General Motors Ventures, LLC, is a subsidiary designed to help the company identify and develop innovative technologies in the automotive/transportation sector. General Motors Ventures, LLC, has been funded with an initial investment of $100 million, and is currently exploring equity investments in a number of auto-related technologies and business models. More information can be found at www.gmventures.com

Proterra’s systems are scalable to all forms of commercial buses. Its ground up designs have led to the EcoRide BE-35, the world’s full size 10 minute charge transit bus that replaces conventional diesel buses on a one-for-one basis operating 24/7.

Paired with the EcoRide BE-35 is Proterra’s proprietary FastFill™ charging station that docks the bus automatically and fast charges through a rooftop connection. The EcoRide BE-35 achieves between 24 miles per gallon diesel fuel equivalent fully loaded with 68 passengers – 600% better than a comparable diesel bus. More information can be found on Proterra and its technology at: www.proterra.com