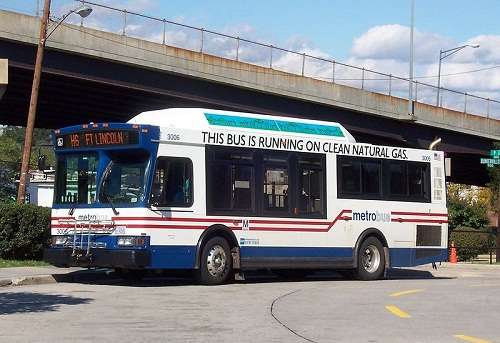 Energy pundit T. Boone Pickens was on hand yesterday as NGVAmerica “took Capital Hill,” with a display of over a dozen natural gas vehicles, ranging from passenger cars to a semi-trailer truck, all powered by the nationally plentiful fuel. Pickens was flanked by members of Congress who agree with his assessment.
Advertisement

"Every month I report on how much money our country is spending on imported oil," Pickens said. "March tipped the scale as we spent nearly $40 billion – $922,912 per minute – on imported oil, representing a staggering 72 percent of our oil needs. We are here today to show the country that we are doing something and we can do a lot more by getting off OPEC oil and onto cleaner, abundant, American natural gas."

According to Richard Kolodziej, president of NGVAmerica, more than 350 million gallons of petroleum were saved last year by the use of natural gas vehicles in the U.S.

"More and more manufacturers are providing natural gas vehicles because their customers are asking for them," says Kolodziej. "When you have companies such as AT&T and Ryder, whose vehicles are on display here today, and many others, you know these vehicles are proven and reliable and, most importantly to fleets, their fuel costs are much lower. This is good for jobs, for the environment and for the country."

The event ran from 8 a.m. to noon yesterday and surprisingly was staged a couple blocks from the White House in front of the National Museum of the American Indian.

The vehicles displayed came from all around the country and were made available by numerous companies and organizations including Ryder System, Inc.; the Vehicle Production Group, Inc.; BAF Technologies; IMPCO Automotive; Westport; General Motors Corp.; Washington Gas; Kenworth; Dillon Transport; Navistar and others.

"Natural gas is a readily available, viable solution to the portfolio of energies America must leverage to keep this country leading the world," said Pickens. "These natural gas vehicles are the symbol of the future of America – I applaud any organization that uses them. As a country, if we fail to invest in American energy to enhance national security and economic security and stability, we're going to watch other nations pass us by and go down as the dumbest generation."

The event closely follows the introduction of H.R. 1380 by U.S. Representatives John Sullivan (R-OK), Dan Boren (D-OK), John Larson (D-CT) and Kevin Brady (R-TX), Designated the New Alternative Transportation to Give Americans Solutions (NAT GAS) Act of 2011, the bill was alluded to by President Obama as one possible bipartisan solution during a recent speech at Georgetown University. The bill intends to jump-start natural gas use by offering limited tax credits and federal regulatory changes to encourage the production and purchase of natural gas vehicles. This bill has already attracted 160 cosponsors from both sides of the aisle.

"Natural gas is a cleaner, cheaper, more abundant alternative to foreign oil, and it is in both our economic and national security interest to use the vast reserves we have right here in our own backyard as the bridge fuel towards energy security," said Congressman John Sullivan, who serves as vice chair of the House Energy and Power Subcommittee. "Currently, 69% of the oil consumed in America is used for transportation, two-thirds of which we import from foreign nations – with gas prices approaching $4 to $5 per gallon, there is no time like the present to incorporate more natural gas vehicles into our transportation portfolio."

"As $4 gasoline continues to drain the pocket books of working Eastern Oklahomans, it is time for Congress to act," added Congressman Dan Boren. "By fully utilizing our nation's vast natural gas resources, we have a real opportunity to make a positive and sweeping impact on our energy and economic future."

"Natural gas is affordable, abundant and American. It costs one-third less to fill up with natural gas than gasoline and, maybe more importantly, we have enough natural gas in the U.S. to meet our energy needs for the next 100 years,” stated Congressman John Larson, the Chairman of the House Democratic Caucus. “On top of that, if we start making cars and trucks that run on natural gas, there's the potential to create over a half a million American jobs. Today's event is a great opportunity for members of Congress and the public to get a first-hand look at what's possible here and now,"