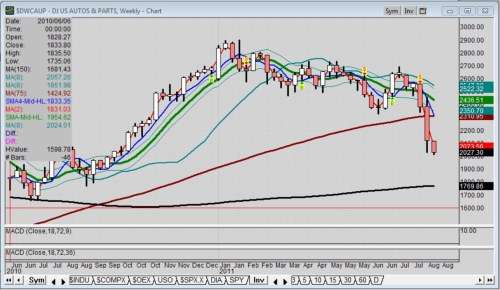 As the only entity even close to an automotive index, the weekly chart of the Dow Jones US Autos and Parts ($DWCAUP) plummeted on the open today with a lower low due to the U.S. bond rating drop late Friday.
Advertisement

How long and how deep is anybody’s guess as the market is now open. However, the futures market already spoke hours ago with a massive 200-plus point loss by 9 a.m.

Torque News will update this article throughout the day, especially if any turn in events occur.

One look at the chart, though, shows automotive and parts following the direction of the general market. In reality, the downgrade for the auto stock sector began in early July. Note the sell signal based on a simple crossover of two moving averages.

Yet, despite that long tail on last Friday’s daily candle (not shown here) looked hopeful, it was already below the 150 day moving average. And the weekly chart here shows the 75 week line (dark red) has been broken. Question is, will the auto sector reach the 2008 levels? Well, first it has to test the black line, the 150 week moving average.

Oftentimes, a sector will simply reflect its own condition. In this case, that condition has been exacerbated by the Washington lack of economic leadership and responsibility.

Frankly, I was not totally shocked by the U.S. downgrade from AAA to AA+. After all, there has yet to be any significant cuts in spending or at least a leadership decision that would indicate the government is indeed serious about getting its fiscal house in order.

So we’ve never experienced anything less than AAA, as 1917 was the last time the U.S. rated anything less. That includes the Great Depression, World War II, Korean War, Vietnam, the Carter-era inflation period, the Reagan cuts, Desert Storm, 911, Iraq War and Afghanistan.

Stay tuned as I watch the technicals for any signs of improvement. Don’t you wish you had purchased even a far out-of-the-money (OTM) put option on the Dow and S&P 500?