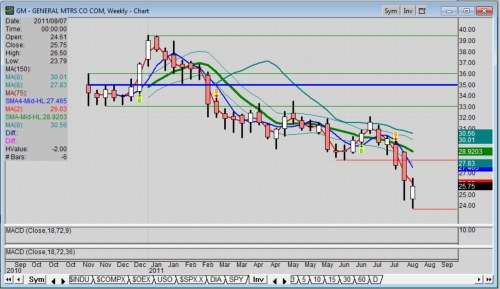 GM stock holders yet to benefit from 15 years in China

While General Motors (NYSE: GM) has begun a year-long celebration of its 15 years of successful automotive operation in China under the theme of “Your Success is Our Success,” the stock has gone through bankruptcy, a resurrection via an IPO and now a downturn with the rest of the market.
Advertisement

Question for GM stock investors is this: When will the relationship with the Chinese contribute to the bottom line in a way that will convince Wall Street to invest heavily? Or will the Chinese one day simply tell GM to take a hike, because they will have been trained to do it all on their own?

For now, GM China is joining the online community for a series of interactive programs, encouraging the public to share their photos and stories of GM vehicles in China. Consumers are even invited to participate in a wide range of activities celebrating the winning products and technology firsts that GM and its joint ventures have brought to the Chinese vehicle market.

There is a lot to be said for a marketing celebration that will occur over an entire year. The celebration will conclude in June 2012, the 15th anniversary of the official establishment of GM’s flagship manufacturing joint venture, Shanghai GM, and engineering and design joint venture, the Pan Asia Technical Automotive Center (PATAC).

Furthermore, winners of the quizzes and activities will receive special prizes, including the opportunity to visit GM’s Detroit-Hamtramck plant, which manufactures the Chevrolet Volt, and Warren Technical Center in the U.S.

According to Kevin Wale, President and Managing Director of the GM China Group, “Over the past 15 years, China’s automotive industry and market have experienced fundamental change. By working in China, with China and for China, we have helped transform the automobile from a luxury into a commodity, making personal four-wheel transportation available to more people. We welcome our loyal customers and others interested in the GM story to celebrate along with us.”

Last year, GM sold more than 2.35 million Buick, Cadillac, Chevrolet, Jiefang, Opel and Wuling passenger cars and commercial vehicles nationwide. That makes GM having the broadest lineup of vehicles and brands among all automakers in China. Since 1999, for example, GM and its joint ventures have introduced more than 40 models, many of which have been engineered in China. The company’s new indigenous brand, Baojun, begins selling the all-new Baojun 630 sedan this month.

Another question that most investors and likely Americans want to ask is, when will we see GM cars built in China show up in U.S. showrooms?

After all, the trip of 15 years began with a single step. Now GM has helped make personal transportation in China more affordable by continually rolling out new and upgraded products in a range of segments while introducing new services such as automotive financing. GM has also made the car buying experience more convenient by expanding its network of retailers, which covers all of China’s provinces.

First came Shanghai GM as the first joint venture in China to manufacture a new global product in 1999, beginning with its original family of Buick sedans. Among its most successful models have been the Buick GL8, which pioneered the executive wagon segment in 2000; the Buick Sail, China’s first affordable family car, which was introduced in 2001; and the Wuling Sunshine minivan, which was introduced in 2002 and has been China’s best-selling vehicle for eight consecutive years.

Earlier this summer, OnStar introduced the first mobile application available in China. Owners can access their cars from the comfort of their home or office using their smart phone for OnStar services such as remote vehicle startup, remote horn and lights, and remote door lock/unlock.

Point is, GM has led in the creation of an industry value chain that extends beyond just manufacturing and selling its products in China. GM operates 11 joint ventures in China in the full scope of its business, including vehicle and powertrain manufacturing, sales and aftersales, engineering and design, automotive financing and telematics, and second-hand vehicles.

“As GM looks back, we are also looking forward,” said Wale. “We recently announced our five-year plan for continued success in China. As part of the plan, we are addressing our vision of sustainable mobility in which the motor vehicle promises to be cleaner, greener and safer. Partnerships between Chinese and global institutions will remain essential for making the vision a reality.”

Since its IPO, GM stock has not been a good investment, especially for the U.S. taxpayers who are holding a losing position at the present price. Just look at the weekly chart. No telling just when that will turn around. Pundits on the web and a major analyst suggested just last week that GM stock could drop to $10 if the economy goes into a double dip recession.

Personally, I think the situation with China will one day prove worse for the stock than a double dip. In my opinion, China will one day thank GM for all it has done for them; and then inform them that they will take it from there. After all, American industries, like GM, have taught the Chinese everything to be globally competitive, including aircraft carriers; plus they now have the best trained and lowest-paid auto workforce.

For the record, General Motors with roots back to 1908 indeed has 11 joint ventures, two wholly owned foreign enterprises and more than 35,000 employees in China. GM and its joint ventures offer the broadest lineup of vehicles and brands among automakers in China. Passenger cars and commercial vehicles are sold under the Baojun, Buick, Cadillac, Chevrolet, Jiefang, Opel and Wuling brands. In 2010, GM sold more than 2.35 million vehicles in China, which represented 28.8 percent growth over the prior year. It has been the sales leader among global automakers in the market for six consecutive years.

While it took the Japanese almost 25 years to be competitive with American automakers, the Koreans reduced the learning curve to 10 years. And once the Chinese do break away on their own in automotive one day, that curve will have been reduced to less than 5 years. The telltale signs are already in place, mainly thanks to GM and the American taxpayers.

Now, do I think GM stock can go up from here? Yes, because the general market will have great influence over the stock's short-term perfornmance as it has over Ford (NYSE: F) and Toyota (ADR: TM) stocks. However, bottom line is, the Chinese scenario is yet to be played out; it's a work in process; but, like good traders that they are, China understands that time is on their side as they exhibit patience.