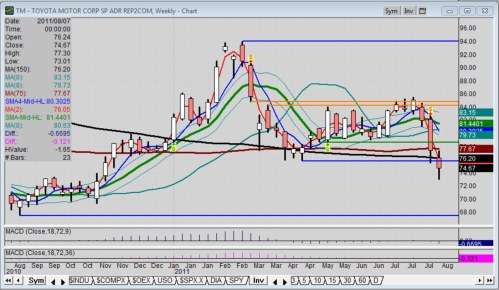 Toyota stock needs the 2012 Camry to be a hit

Toyota Motor Company (ADR: TM) stock may have traded above 84 just a few weeks ago, but that was then and this is now; as the stock has plummeted to the low 70 range, adding pressure on the upcoming 2012 Toyota Camry to be a hit among auto buyers.
Advertisement

In all fairness, that earthquake and tsunami surely twisted Toyota Motors (ADR: TM) stock performance as much if not more than the accelerator issues. However, the more recent announcement of earnings loss was exacerbated by the bear pressure of the general market and the credit rating hit to America and the credit issues in Europe, the largest markets for Toyota products.

It wasn’t that long ago, that investors wondered just how much of Toyota’s stock up-move was directly related to the 2012 Camry news and all those photo shots, as if they were from spies. Fact is, they were releases from Toyota, confirmed when Akio Toyoda released a peak of the front headlight, further confirming the shot taken in May at least in that frontal area.

Fact is, the 2012 Toyota Camry is scheduled for release in the fall. So, from a marketing perspective, the photos are setting the stage and with good reason. Toyota needs a winner to spark a return to profitability.

Auto sector investors know Toyota has had many problems with quality, but investors have not failed to buy the stock on drawdowns; but this latest drawdown has investors extremely cautious. And the hope that the 2012 Camry will help Toyota get its mojo back is running as high as the hopes that America will not fall into a double dip recession.

From technical chart perspective, Toyota stock is in a funk along with the rest of the auto sector stocks. Just in the past week, Toyota stock has found buyers at 73.11 and 73.01. For the record, it broke major support at the 75.85 level set in April. The next level of major support is 67.56, the low of September 2, 2010.

In my opinion, if that level is broken, it will likely be the general market and global credit issues driving the stock down, not Toyota as a company.

Last month as Toyota stock was challenging a price gap at 84 level, I asked the question: Will that 2012 Toyota Camry be enough news to empower the stock through an upside gap? Now I have to ask, will the 2012 Camry be enough to keep Toyota stock from plowing below the next major support at 67.56?