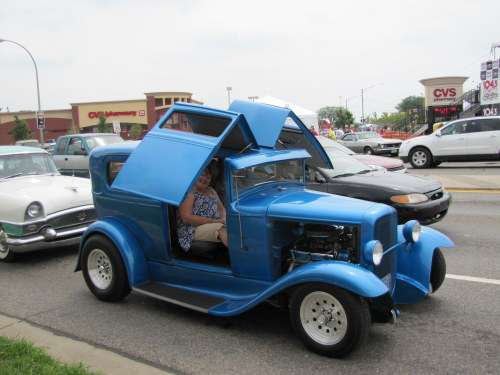 Throngs of car enthusiasts gathered all week, but Saturday was the official event of the 2011 Woodward Dream Cruise, undeterred by a rain storm late in the afternoon, and where Chevrolet’s Centennial celebration and GM’s Performance Division held on to rule the street with multiples of displays and parades against fine show cars and street rods from auto enthusiasts from Michigan, nearby Canada and other states around the country.
Advertisement

The 2011 Woodward Dream Cruise is officially over, but it once again held onto its title as being no only the largest among the cruises, but the motorized equivalent of Woodstock with more than a million car fans flocking to Detroit’s legendary Woodward Avenue.

As part of a pre-cruise event, even GM Design (Studio) folks showed their own collection of cars on Wednesday, where this reporter took plenty of pics and videos. Yet, there were far more cars than just the gathering for the Chevy Centennial, as you can see by the photo, a hot rod with gull-wing style doors were too good to pass up, then the slideshow below as well as the video.

Well, there was no way I was going to miss the Saturday events either; frankly, it’s a great time where people are enjoying life. In today's economy, it's pleasant to see. So, I and Judi took our Chevy HHR down Woodward from South Boulevard near Pontiac until we arrived at 13 Mile Road. Of course, parking was hard to find, but we finally found a spot and walked the rest of the way to visit the GM performance station at Memorial Park just north of the Woodward and 13 Mile intersection.

The display was outstanding enough for me to make it into a separate report, complete with its own video. Most notable, though, was the E-ROD emission-compliant 1955 Chevy Bel Air hot rod, along with other concepts, classic, and current hot rods. Technical experts were on-site to answer Cruisers’ questions.

Chevrolet Activities at the Birmingham Triangle was another area of focus. Some 60 cars were on display, ranging from heritage vehicles to the new Volt, Sonic, Cruze Eco, and Camaro ZL1. Also on display were the vehicles from the “Transformers” movies and a selection of Indy 500 pace vehicles.

Detroit-area Chevrolet Dealers even paraded from 8 Mile Road to Pontiac, then back to 16 Mile Road early Saturday.

So, for those who could not attend, I took both pics and videos of the 13 Mile Road area. Be apprised, though, I concentrated more on videos this year; and, even then, could not cover it all. Hey, it’s a giant cruise. Even Channel 7 Action News (ABC affiliate, WXYZ) had a host of people covering the cruise for television until the event closed.

So, here are the pics followed by the video sets. Enjoy and look for the Performance Division report with video in a separate article.

Tesla-Funded Research Reveals One of The Biggest Mysteries of EV Battery
Tesla Tesla Buyer Nets a Whopping $12,000 Discount After Asking for Reduction
END_OF_DOCUMENT_TOKEN_TO_BE_REPLACED