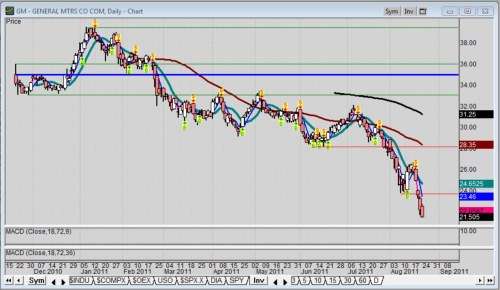 Investors in General Motors Company (NYSE: GM) stock, including the federal government, are likely wondering where the pain will end and when stock price appreciation will occur, as GM stock plunges further below technical levels of support with more lower lows and lower highs.
Advertisement

Note the intra-day snapshot for GM stock dating back to its IPO. Despite beginning operations as a new company in July-2009 and an IPO in November-2010, and making good early progress toward its goal of long-term sustainable performance, delivering six consecutive profitable quarters while improving global market share, plus maintaining a strong balance sheet, GM stock has performed poorly.

And despite all the technology gains with the Chevy Volt and now transferring that technology to Cadillac as well, the stock seems subject to market forces beyond its control. Then again, market forces are beyond everyone’s control these days.

Even GM’s recent announcement about its plan of streamlining its processes has not made much impression on investors to buy the stock. In fact, the opposite has occurred as we see lower lows and lower highs.

To put all this into perspective, the recent sell-off by General Motors stock was not alone, as all stocks fell, including Toyota (ADR: TM) and Ford (NYSE: F).

Question a few days ago was, would the stock’s higher close with support at the Aug 8th low of 23.79 define the beginning of a long or short-term bull pattern for General Motors stock? Well, we seemed to have that answer as a definite - no; because GM stock broke through that level on Thursday, Aug 18th. And today’s price action has forced the stock solidly below 22 for the first time since its IPO.

Point is, no matter what GM CEO, Dan Ackerson, says about driving costs down by reducing vehicle architectures, thus increasing profit margins, GM stock is subject to the general market forces. Furthermore, the entire auto stock sector is subject to those same forces..

The only good news is, GM is finally coming alive with a new mindset when it comes to margins; and that’s good for the long-term view of the stock.

As I have written before, GM stock has not done well since its IPO in November of 2010. The broken low at 23.79 was significant support, but now stands as mere upside resistance on a technical chart. Furthermore, those two lines on the chart above the price bars are the 50-day (Dark Red) and 150-day (Black) moving averages. Technically speaking, that's as bearish as it comes.

Aside from the 50-percent of IPO at 16 and one-third of IPO at 11, I opt for book price and its divisions, because there are no true technical price levels that are relevant to the cash and operations of the company. Some may prefer to use some fancy price to cash flow derivation, but the company is still deep in debt with government loan, and the government wants to dump its shares eventually.

According to MarketWatch.com , GM stock has a book price of 19.67, making the present price/book ratio in the range of 1.13. Yet, before this trader buys, I want to see a favorable market environment supported by an economic structure with some surety of intentions.