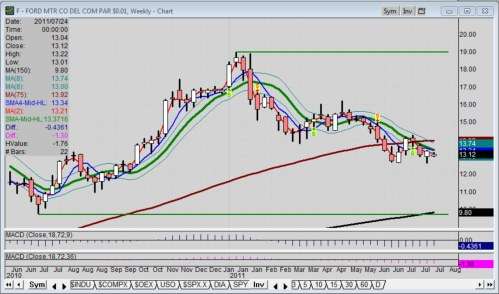 New technology oftentimes experiences a decrease in initial quality and reliability. Not so with Ford's hybrid technology, which is good news for Ford Motor Company (NYSE: F) stock holders.
Advertisement

Ford’s latest news release may have been mainly about the Ford Fusion, but buried within the release was news that may not be well known by Ford stock holders: A Ford Escape Hybrid in San Francisco is getting 30 percent better gas mileage for Yellow Cab; and, in addition, Ford hybrids are getting high reliability ratings.

According to the Ford news release via media.ford.com, Yellow Cab in San Francisco, General Manager Jim Gillespie can’t say enough good things about the Ford Escape Hybrids as well as the Fusion Hybrids that make up more than half of his fleet. In a year, he said, his drivers will put about 80,000 to 90,000 miles on a vehicle.

“They’re incredibly durable,” he says. “We have these taxis on the street for about 21 hours; we take them off from about 3 a.m. to 6 a.m. We have them in stop-and-go traffic, heavy traffic, going up and down these hills. There was a fear at first that they wouldn’t be able to take it. But they’ve been great. The guys drive about 10- to 12-hour shifts – at about one third of their previous gas consumption.”

For the record, the Ford Fusion Hybrid is already America’s most fuel-efficient sedan and may be the highest-quality hybrid based on hundreds of millions of worry-free miles its owners have traveled.

Ford’s hybrid taxi fleet has logged more than 80 million miles in California alone during the past decade – more than quadruple the number of miles logged by Toyota’s Prius lineup. Yet, among the nearly 43 million battery cells Ford has tested or seen put to work in customer vehicles, only five issues have been documented.

This impressive quality record has surprised taxi operators who expected to experience more issues as they led the adoption of Ford’s patented hybrid technology. The Fusion Hybrid, which a leading consumer magazine rated America’s most reliable sedan of any hybrid or conventional model, also has taken hold with customers who give it a 91 percent “overall vehicle quality” score compared to 80 and 71 percent for the Toyota Camry and Nissan Altima hybrids, respectively.

The Fusion Hybrid’s success is even affirmed by the 2010 U.S. Global Quality Research System (GQRS) report that tracks initial quality and was conducted for Ford Motor Company by RDA Group of Bloomfield Hills, Mich.

“Ford’s battery technology is so strong, the odds of experiencing an issue with one of our hybrid battery cells is around 8.5 million to 1 – about the same odds as a person being struck by lightning twice,” said Chuck Gray, chief engineer, Global Core Engineering, Hybrid and Electric Vehicles. “Ford understands that for new technology, reliability can be a concern for customers, so we work extra hard to deliver a trouble-free product.”

Customers are noticing the strong performance, too

The Fusion Hybrid is delivering a 75 percent conquest rate, bringing more new buyers to the brand than any other Ford vehicle.

The durability and longevity of batteries – which Ford has been developing and testing since the 1980s – is essential as the company expands its electrification plan, building on its leadership with five new electrified vehicles arriving in North America by 2012 and Europe by 2013.

The Fusion Hybrid hit the streets in 2009 with a leading 41 mpg city rating, 10 mpg more than the Toyota Camry Hybrid. Since then, the car has wowed customers from coast to coast – leading to a hybrid-best customer satisfaction rate of 88 percent compared to 80 percent for Prius from 2009 to 2011, according to GQRS.

The role of the hybrid battery

Ford currently designs its hybrid electric vehicles with a high-voltage nickel-metal-hydride battery. The current product represents a second-generation battery design that is 23 percent lighter than the first generation.

To achieve even higher fuel efficiency, Ford’s Powersplit technology system uses two motors and a simple planetary gearset to create an electrically controlled, continuously variable transmission that allows the use of the most efficient operating points of the engine and motors. To date, Ford’s Powersplit technology has received more than 200 patents.

“The electric motors are another great story,” Gray said. “With nearly 190,000 produced, we have zero motor failures.”

Ford’s decades of battery research has laid the groundwork for taking the next step in battery durability – moving from the larger, heavier nickel-metal-hydride batteries to even lighter, more powerful lithium-ion batteries.

“The lithium-ion battery not only saves us weight and precious space, it’s more efficient,” said Gray. “We need that increased capability so it can drive the vehicle much longer.”

Fact is, electrification is an important piece of Ford’s overall product sustainability strategy. Ford’s aggressive strategy now includes five new electrified vehicles in North America by 2012 and in Europe by 2013.

Ford has invested billions in researching and developing new, fuel-efficient engines, transmissions and electrified vehicles, even during the depths of the economic downturn, when competitors dialed back product spending. Today, Ford Motor Company has 12 vehicles with best-in-class fuel economy and four models returning at least 40 mpg – a claim no other automaker can match.

On a short-term basis, Ford stock is subject to all the debt and destruction talk in Washington; but, from a fundamental perspective, Ford is honing its trade quite well.