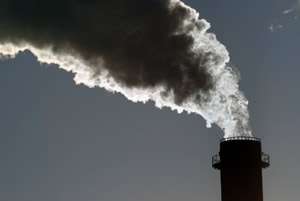 Hold the presses and the auto web blogs. The media has been reacting to coal as a cause for global warming when sulfur particles reflect solar energy into space? At least someone finally found one reason why the earth has not warmed up in the last ten years.
Advertisement

Does this mean we should stop the electrification of the automobile, too? Or burn more coal?

The study published in Proceedings of the National Academy of Sciences by a team of two geographers and two economists headed by professor Robert Kaufmann at Boston University (BU) say the sulfur in China coal plants literally offset the CO2, which explains why there has been no increase in earth temperature for the past ten years.

Who knew? Don’t you just love how governments pay scientists and universities millions in research only to hear another from the scientific community say, Oops, our bad?

Fact is, global warming advocates have long charged that burning coal releases carbon dioxide that traps heat from the sun, which raises temperatures to the danger level. What they failed to track, though, was the emission of sulfur particles which seem to help block the sun's rays. End result seems to be a cooler earth, at least in the short run.

Problem is, cleaning the air after burning coal makes the warming more of a reality, because it reduces particulates in the air.

In a way, the burdening impact on the economy to fight a climate problem that doesn’t exist now looks as absurd as many thought. Still, we have plenty of other reasons to not burn coal; it’s just that climate temperature isn’t one of them, at least according to this latest report. I’m waiting for a rebuttal, by the way, likely to be paid by your tax dollars.

I also realize American automakers are still getting hammered to totally eliminate fossil fuels, while China gets a free ride because they are supposedly an emerging economy. Have you checked their export numbers lately? That’s far from emerging except in the sense of getting ahead of the U.S.

Now for the other side of the equation

So, climate change is not affected by coal; almost a a zero-sum game, at least until you stop burning it and try to clean up the air. Then reality hits home.

Point is, sulfur has more than one use besides homeopathy, and fire and brimstone. But what about clean air for humans to breath? Breathing sulfur is not exactly my idea of clean air for my kids and grand kids. And as an asthmatic, I still say it’s important.

On the other hand, I detest scientists being used to promote a political agenda that has no basis in truth. And I definitely detest government officials using tax dollars to play their game.

Simple fact is, easy-to-get oil is past its peak, and that makes it too expensive as a fuel, which is reason enough to still switch to natural gas. Also, it burns cleaner. What a novel idea! Yes, I believe in competing commodities to act as a hedge.

It’s also a valid reason to rein in the pace of the Environmental Protection Agency and its efforts to regulate carbon dioxide emissions. They should base their agenda on free-breathing, clean air, not just CO2 levels. Fact is, the EPA with its regulatory agenda has been at war with the American coal industry, and to a lesser degree, the auto industry.

And don’t forget the economic impact by government manipulation using EPA to ride herd on laws defined by them, like carbon management and credits.

Bottom line for me on this subject: I’m not saying we should give up on automotive electrification totally. It’s just we have sufficient economic reason to concentrate more on fuel efficiency, rather than some climate event that now has been proven to be non-existent.

I have always felt the world went warm naturally during the middle ages when there were no cars, no China and no major coal industry. Did scientists turn off their logic? And one look at a National Geographic program showing volcanoes deep in the ocean spewing did it for me years ago.

Now the BU study also confirms the huge impact that natural phenomena such as volcanic activity, ocean currents and solar activity have on climate. So, let’s stay the course for fuel efficiency, clean air and clean planet, but let’s not allow political and social engineers to sway us ever again from a sensible approach.