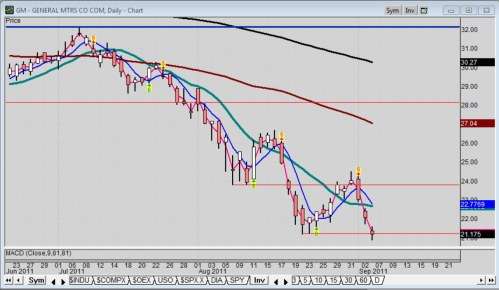 General Motors Company (NYSE: GM) may have reported sales up last week, but there were cracks in the bubble again as GM stock faltered, and Chevy Volts failed to make any sales gains over the Nissan Leaf.
Advertisement

Face it, General Motors Company (NYSE: GM) stock has not had a good year. One look at the price-time chart shows a literal plunge in price since its post-IPO high last January.

Even as recent as Tuesday morning’s first hour of trading after Labor Day, GM stock opened lower and cracked a lower low than the previous swing low of 21.18. It recovered a bit, but not by much; and the day has just started. The general market as I write has the Dow down again over 200 points.

As an investment for the U.S. taxpayers who still own a considerable amount of GM shares, the chart shows GM stock as a major dud. Of course, there was no mention of that fact in President Obama’s speech before a crowd of 12,00 supporters and union folks at downtown Detroit on Labor Day, right next to the GM world headquarters.

Electrification has yet to pay off in sales

Just when you thought GM was making headway with its electrical and hybrid technology, the Nissan Leaf plows through with more sales by a factor of 4. Perhaps a full EV that costs $5K less and causes range anxiety is still a more desirable choice.

And with GM stock now trading 32% below the IPO price, investors are now wondering what to do. Desperately searching to recharge their enthusiasm, GM now touts the 3 shifts of the Chevy Cruze, because the Chevy Volt is simply not contributing to GM’s bottom line.

It appears the demand side of the equation is hindered by price. After all, a lower cost but fuel-efficient Chevy Cruze surely makes a lot more economic sense than a $42K Chevy Volt that is not helped much even with government subsidies.

Problem is, GM stock is still in its first year of trading since its IPO. That means it has very little price history, unless you want to rely on past charts of the old GM stock. Right, no value.

The only sure price levels GM stock has at this point are round numbers like 20, 15, 10, 5 and zero. The other is book price, which sat at 19.67 the last time I checked MarketWatch.com ; and that level might be tested this month.

Point is, there is simply no past history of price whereby a trader can point as support whereby traders might come in to buy. That level will be established soon, though.

Question is, should GM stock trade below book value at this juncture? Or should GM trade above Ford stock which is trading just above 10? Ford didn’t take a bailout, but it, too, has a ton of debt on its books like GM. And, perhaps, that’s another point. Perhaps the market needs to find that inflection level on its own where buyers are likely to come back in, not some convenient round number. But there are plenty of those, too.

Nope, all of us are going to have to wait in a vigil to find GM’s price support level, because it will not be small traders and 401-k holders who will have the major say, but the large funds. They are, after all, the large gorillas in the trading room.

Is there a strategy besides wait? Sure, play the downside with put options. And if you want to get paid while you wait to buy, you could sell a put option on GM stock. It’s a viable bullish strategy. However, I do find the low premiums of a few strike prices out not worth the risk, but that risk goes does reduce considerably as the stock goes lower. Maybe I’ll change my mind after the President speaks on Thursday. How about you?