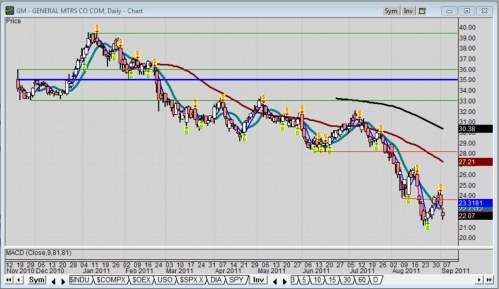 Labor Day 2011 in America should reflect a nation filled with free market enterprises unshackled by government abuse, legislative uncertainty, extended tax burdens and the expediency of politics whereby jobs and lives are dealt as pawns.
Advertisement

Since you are speaking in Detroit, the place of my birth, then consider this my own Labor Day shout out to you, Mr. President: Fix the economy now!

You said to those in the northeast it’s your job "to get Washington politics out of the way of help to those in flooded areas." Well, apply those same words to job creation, and I believe the economy will take care of you.

You claim you did not create this economy. Well, you surely own the recovery; or, should I say, the lack of it! And you still have us taxpayers own a piece of General Motors. Just look at this chart of General Motors Company (NYSE: GM) stock that the government still owns shares. It displays the same pattern as the employment rate. Both are in their own bear market! At least GM has a product.

As an author, taxpayer, investor, a veteran, son of a wounded veteran, and now an auto industry retiree, I really want changes WE can believe in, like ridding many of the bureaucratic and legislative burdens government has placed on businesses. High cost electric cars that require government subsidies, for example, will not make my life or anyone else better or richer.

Frankly, I do not care what party gets credit for what. The stalemates and blame games for economic failure are mighty old. The unemployment rate is atrocious despite all the government programs and rhetoric. And the last thing we need is another program that merely creates government supported jobs via our tax dollars.

No, we need a strong dollar, perhaps an equitable flat tax whereby everyone contributes, and long-lasting jobs in the private sector; change that we can believe in because it is a sound business environment that betters our lot in life, not more unemployment benefits. Not another temporary cash for clunkers program, or more shovel jobs from Washington.

Many in government and society have forgotten the simple truth that the Sabbath rest commandment is two-fold, in that we are also expected to labor the first six days; meaning, labor is not only a need because it is part of our human heritage, but also part of a great spiritual law, thereby transcending organized religion and politics. Failing to provide an environment where labor can grow is a clear violation of that principle.

But labor is also supposed to accomplish something, Mr. President, including yours. That’s why you were voted in. Right now, you’re coming up way short. The “Yes, we can!” mantra has turned into “NO, we can’t!” and “No, we won’t if we can’t do it our way!” further induced by finger pointing and politics as usual. Actually, with all respect, it’s worse now than ever thanks to your lack of leadership in bringing all of Washington together on this matter. Instead, you've sadly facilitated its division.

Work for the rest of us is an integral element of our human purpose, to labor at something, to improve the lot of our lives and the lot of others around us. But we need a an environment that supports work; and that is the job of government, not redistribution of wealth. It’s much more than just a matter of survival anymore, but human accomplishment and growth. Yet, not everyone views labor with the that same sense of understanding today; and no thanks to politicos in Washington.

Recall the words of America’s first ‘TV beatnik of the ‘50s, when he said, “Work. Work?” Like Maynard G. Krebs, some try to avoid labor like the plague, others prefer to traffic their way towards wealth due to lack of real opportunity, while others relish and imbibe in work to the point where they abuse themselves and their time with their families.

Some even spend so much time getting an education to prepare for a life of labor that they inadvertently end up feeling entitled to positions and wages just for the educational achievements alone, not for their service, accomplishments and time within the labor force. In plain language, some choose to use education as a way to avoid labor and real responsibility, and then live a life of entitlement by educational position. Same goes for professional politicians.

Likewise, many without the benefits of higher education join a union because of the sense of helplessness to negotiate a fair wage. Others try to power their way toward more money, more benefits, more position just because of the power in numbers, not in their personal and collective value toward building more quality products and services for society.

Others make it to the top of their company management and enjoy wages far beyond the average worker in their fields, where they are groomed to expect a life of constant take, entitlement and expectation which overrides fair judgment and wage negotiations with labor elements.

Balance comes to mind whenever I think of work now. After a 39 year career in the auto industry as a design draftsman and later as a design engineer, I still view work much like my parents before me. Yet, early retirement has especially modified some of my thoughts, too. Fact is, I’m still working, otherwise you might not be reading this at all.

I recall my father doing the same. He started his work life as a coal miner in Pennsylvania. After quite a few years when he left the mines, he walked and hitchhiked to Detroit, because that’s where the better jobs were. How times have changed!

He later became a barber; worked in and out of machine shops, went off to war for America, and finally returned and completed the rest of his work career as a tool design draftsman for Chrysler which was unionized, by the way, and where he once told me that out of all his many jobs (30 in one year at one point), designing was the easiest buck he had ever made.

Yet, when he retired, with his wife already passed on from cancer, Frank Sr. still pursued work in another form. He invented the Kompak Shave Kit and the Reddi Brush. He still enjoyed working; it seems even in retirement he needed some form of labor.

By the way, his wife, Josephine, worked all her life, too; from hauling coal in buckets as a kid to later cleaning houses, then making the rivets for Rosie during WW2; and that was in addition to being a wife, mother and homemaker.

Labor for me at this point in my life is certainly much easier than it was for my parents. For one, it is now more enjoyable being early retired, because I don’t have to do the 8 to 5 just to eat. That’s a mighty blessing to say the least, but I have not forgotten that those benefits which I enjoy came easily but through a life of labor. And I also know all benefits bar none can be taken away at any time; in other words, there are no guarantees and no forever entitlements, and there are many reasons for that.

Think of a downturn in health. Think of a natural disaster or another war. Yes, there are no guarantees in this world of our corporeal existence.

Point is, it in within our human purpose to work, to labor at something, to improve the lot of our lives and the lot of others around us. Again, it’s a matter of survival for sure, but no less a matter of human development and accomplishment.

Unfortunately, the government, local, state and national, have mishandled work in America in my opinion, especially in the past two generations. In Michigan, my previous governor said she would blow us away; and she did! First, they tax the hell out of labor so the joy is always tarnished. Then they tax the wealth that is stored such as our homesteads and inheritances. Then they tax our capital gains that we invest to save for our old age. The cost of insurance, transportation, energy and healthcare are exorbitant simply due to lack of leadership at every level; and still they added more debt as if there was no end.

That forces people to adopt the way of get, the way that leads to more greed; always wanting more, because someone else is always trying to take more and more away. And the government is more than willing to facilitate by taking from one and giving to the other, especially towards those who do not wish to work or educate themselves.

That is why the economic debate today is such a farce, in my opinion. No matter how the President and Congress introduce new jobs programs, they do not feed the real needs of the electorate because they’re usually created as a temporary or short-lived program, seldom long-lasting, free enterprise. Talk about trickle down policies that do not work - even liberal-minded work projects with good intentions are often total failures with unintended consequences; at least I’m told they are unintended, but now I wonder about that, too!

Fact is, we need what the founding fathers envisioned: a nation conceived in liberty; and that means the freedom to work, to find work, to invent work, to start a business without hassle, and to enjoy the fruits of our labors. And we need what Reagan envisioned, a smaller government that needs to spend less so it can be less of a burden.

Somehow, character is not developed when jobs are created just for the sake of acting like a social equalization program. It’s demeaning, degrading and just plain wrong.

So, Mr. President, when you speak on jobs this Labor Day week, I hope you have the sense and the courage to admit your faults and failures in leading and bringing America together on this issue. Nobody really cares what your color is; otherwise the majority would not have voted you in. Nor does anyone without a job care what party you represent. People need freedom to do the labor their Creator commanded them to do.

And if politics are in the way, then you need to represent new politics like you promised on the campaign trial. Remember that? Change we can believe in? But if you are unwilling or incapable, then be a man enough to admit it and step aside; and let’s bring in someone who actually can, and labors at it sufficiently to bring about a better job environment instead of just talking about it and blaming others.

Elon Makes a Cybertruck Statement With an Action, But Quiet in Words
Tesla's Record Month in China: Doubled Registrations in March 2021
END_OF_DOCUMENT_TOKEN_TO_BE_REPLACED