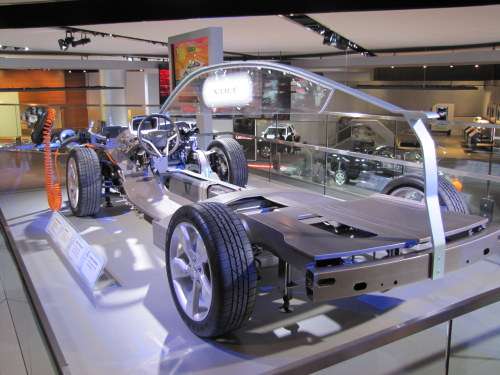 Despite an unconfirmed rumor set off by Der Spiegel Online that General Motors and the German automaker BMW are seeking some sort of cooperative arrangement with IC engine and electric propulsion, probability seems high, logical on the surface, but less of a win-win, at least for GM.
Advertisement

With everyone's eyes on the Frankfurt Motor Show and my own own limited German translation skills, Der Spiegel seems to insinuate General Motors Company’s (NYSE: GM) interest in BMW is primarily related to the German firm's gasoline and diesel engine technology. In return, BMW would get the scoop on the Volt propulsion system that is used in the Opel Ampera.

Fact is, as a stock trader I view similar rumors like this all the time. Question always is, who will benefit most? In this case, GM will not gain as much as BMW, in my opinion, unless cash was involved for the Voltec Propulsion technology.

By the way, another rumor within Der Spiegel and comments says GM might consider selling Opel, despite its change of heart a few years ago. Is this related?

What would Q have said?

Putting our own auto espionage hats on, what would Q have said to James Bond about the likelihood of any of this happening? I think he would have told him that GM would likely work with BMW, because they have worked in the past; plus Lutz once worked at BMW and is still advising GM management.

On the other side of the coin, GM management has yet to make any headway in IC engines except for the HCCI technology that runs like a diesel on gasoline. To me that implies GM needs a much bigger win with IC engine technology, something perhaps beyond BMW’s present capabilities.

Yet, BMW needs the Volt technology more than GM needs BMW IC engines. Here’s why: BMW wants to engage electrification, and it likes that Opel Ampera.

In truth, BMW has greater diesel knowledge than GM, but diesels are still limited unless there is a major change in efficiency. Furthermore, GM squandered its time and diesel knowledge with Isuzu, and floundered with its dealing with Fiat. At least nothing substantial showed up in American cars. Recall all the money that Wagoner lost on that Fiat fiasco before the bankruptcy?

However, BMW’s gasoline engine technology, with all respect and no matter how advanced in 2011, still won’t meet the MPG mandates expected in 2025. So, why would GM do it at all, unless it’s just getting something as part of a Volt propulsion deal?

Truth is, GM is not always the smart one in these deals. Look at how many times GM has bought or created some company or technology, then later condemned it to die a slow internal death. Can you say, Saturn? How about EDS and Hughes?

Frankly, GM could take the money and simply pay off debts. GM certainly needs the cash to balance its retirement commitments let alone pay off the U.S. government. Buying back the GM shares would certainly be cheap.

Better yet, GM could license the Volt technology to BMW; take the money and put it into the next evolution of the IC engine, like the split cycle. Split cycle IC engines are far more advanced and have the potential to yield higher MPG and lower emissions than either GM or BMW have right now. It is the next wave for IC engines!

Furthermore, GM would be in a far better position to align itself with one of the split-cycle engine designers, like Scuderi Engine or Tour Engine, or even Achates Power for 2-stroke diesels or Cyclone Power for steam power for that matter. All are micro in size by comparison to BMW and would likely welcome the alignment with open arms.

Sure, GM has HCCI technology in its lab, but even that comes up short on the efficiency needed to pass 2025 muster of 54.2 MPG average. GM needs to think bigger, way bigger. And licensing its way in both directions may be the answer. But unlike the Chinese who prefer to steal technology, at least BMW is a decent paying, equitable partner who knows how to keep a secret.

Bottom line for me on this rumor is this: It can happen and likely might happen, but it’s far from earth shattering, with all respect to BMW. However, future GM engines truly need to have something special that makes them more relevant in comparison with the competition; and it starts with a very high MPG number for the city like 55.