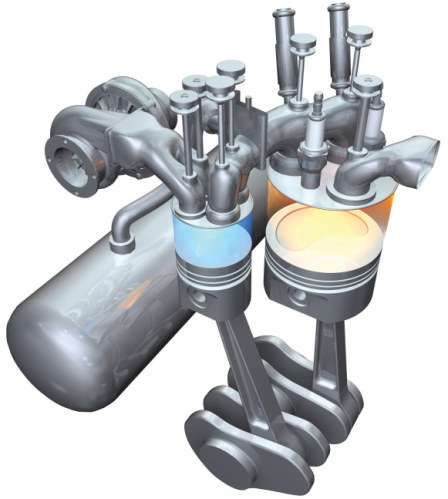 The data from the stunning release showed that a turbocharged/air-hybridized Scuderi Engine can achieve at least 65 miles per US gallon (77 UKmpg or 3.7 liters per 100 km) while emitting significantly less CO2.

As a point of reference, the average fuel economy for a gasoline vehicle in the European high economy class is about 52 US MPG or 4.5 l/100km. Commissioned by Scuderi Group, the simulations were conducted by Southwest Research Institute (SwRI), an internationally recognized, independent research laboratory based in San Antonio, Tex.

In the study, SwRI also found the Scuderi Engine emitted only 85 g/km of CO2, compared to 104 g/km, which is the average amount emitted from a conventional engine in this particular vehicle class.

In the SwRI study, a survey of European high economy gasoline city cars was carried out from which the specifications of a representative “average” vehicle (mass, drag coefficient, power, top speed, acceleration, drivability) were derived. A Scuderi Engine was next sized together with appropriate gear and final drive ratios to match the required target vehicle performance (top speed, acceleration, drivability) while minimizing the fuel consumption over the European drive cycle (NEDC).

“The ability to demonstrate consistent power and improved efficiencies with credible analysis of our engine is essential for the OEMs evaluating the Scuderi Engine,” said Sal Scuderi, president of Scuderi Group. “These new results continue to build on the progress we’ve made in the development and testing stages and are critical as we continue to move closer to commercialization. We are very confident that these efficiency numbers will only get better with every new discovery around this exciting new combustion process.”

For the record, the Scuderi Engine is a split-cycle engine based on new combustion science that has the manufacturability of a conventional engine combined with unparalleled engine efficiency gains. Consistent with conventional four-stroke engine designs, the combustion cycle of the Scuderi Engine has two high-pressure strokes—compression and power, one cold, the other hot.

The Scuderi Engine achieves its lowest rate of fuel consumption when utilizing a turbocharger in Miller Cycle configuration, which can be readily achieved by differential sizing of compressor and expander cylinders. The design is also optimized for air hybridization (when a small air tank is applied to capture and reuse wasted energy).

Proving the IC Engine Not Dead

Governments worldwide view the electric car technology as a partial answer to climate change, pollution, dependence on oil and the need to achieve higher fuel economy. However, many experts anticipate that the adoption of non-fossil fuel technologies will take several decades to occur due to limitations of the technology and the exorbitant infrastructure and development costs required.

In response, Scuderi has created an alternative or interim technology that is both efficient and cost effective. It is a high efficiency engine design based on new science that involves little re-tooling and minimal manufacturing costs, meaning no major upgrades are required for the worldwide transportation infrastructure.

Thus the Scuderi engine will bridge the gap between fossil fuels and renewables for decades to come as it provides efficiency gains that have more impact and less cost than alternative transportation technologies today.

Scuderi Group will provide more details on the results of the European economy vehicle study at the IAA Frankfurt Car Show in Germany, during press conference scheduled for noon on Sept. 13.

More About the SCUDERI™ Engine

The SCUDERI™ Engine divides the four strokes of a combustion cycle between two cylinders - one cylinder functions as an air compressor, handling intake and compression, while the other cylinder handles combustion and exhaust.

By optimizing the split-cycle concept, the engine can drastically reduce NOx and C02 emissions and substantially improve fuel efficiency, compared to a conventional engine. The engine requires one crankshaft revolution to complete a single combustion cycle and is projected to have higher torque, thermodynamic efficiency, and lower emissions than possible with today’s engines.

Based in West Springfield, Mass., with offices in Frankfurt, Germany, and Nagoya, Japan, Scuderi Group has developed a revolutionary engine technology anticipated to replace many of the standard internal combustion engines used in applications such as cars, trucks, power generators, ships, agriculture equipment, etc.