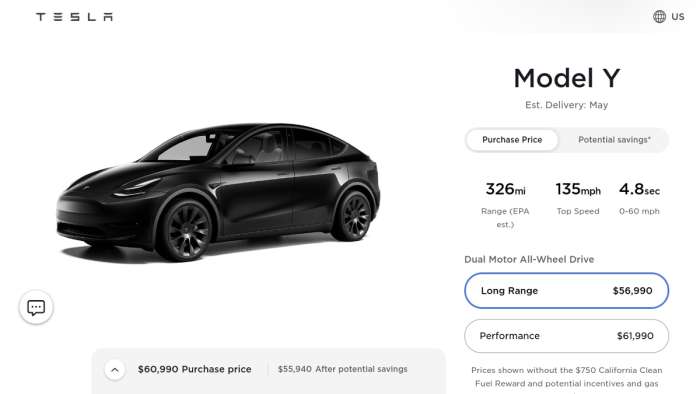 Despite setting record delivery numbers, Tesla seems to be struggling to meet the exploding demand for its vehicles. For the second time this month, Tesla has once again instituted a wide-ranging price increase on its vehicles. The price increase affects the Model S, 3, X, & Y.
Advertisement

Tesla has been enjoying booming demand for its vehicles causing some Tesla variants to have delivery dates as far out as November 2022. This seems in line with the broader automotive world as chip shortages and supply line disruptions caused by the Covid-19 pandemic have forced auto OEMs to significantly cut back production.

However, through hard work and ingenuity, Tesla has been able to navigate the chip shortage relatively unscathed. Rather than decreasing production like most automakers, Tesla has been posting record production and delivery numbers. Not to mention record profits and an industry-leading automotive gross margin of over 30%.

In the third quarter of 2021, Tesla said it delivered 241,000 vehicles for a 65% growth year over year. However, despite Tesla growing production at a rapid rate, the automaker still seems unable to meet the exploding demand for its vehicles.

And now, in an update to the company’s online configurator, Tesla has instituted a wide-ranging price increase of its vehicles. The price increases affect the Model 3, Model Y, Model S, Model X. And the price hikes range from $2000 up to $5,000, making this the second Tesla price increase in just 2 weeks.

The company’s most affordable offering, the Standard Range Plus Model 3, saw its price increase by $2000 for the second time in a row and now starts at $44,000 up from an earlier $40,000 at the start of this month. The Performance Model 3 remains unchanged at $57,000 but that’s after it also saw a $1000 price increase earlier this month.

The Long Range Model 3 remains unchanged at $50,000, that is however following a $1000 price increase the vehicle saw this July. These are just the latest prices increases for the Model 3 however since the start of this year, prices of some variants of the Model 3 have increased by as much as $7,500.

The next vehicle to get the price bump is the Model Y. The Long Range Model Y saw its price increase by $2000 and now starts at $57,000. And this follows a $1,000 price increase earlier this month for the same variant.

Having recently discontinued the Standard Range Plus Model Y, entry to Tesla’s affordable crossover in the US now sits at $58,200 including the mandatory $1,200 doc and delivery fee.

The Performance Model Y remains unchanged at $62,000 that it however after the vehicle saw a similar $1000 price increase earlier this month. The price changes to the Model Y just this year add up to increase the starting price by as much as $7000.

The Model S & X were able to skip the last round of price hikes, however, Tesla’s more high-end vehicles saw the biggest price increases this time around. Both the Long Range Model S & X now start $5,000 higher.

Tesla just did something stunning: showing a future without Elon Musk. Here is how it looks like. https://t.co/hRnc1NoWom
-
NEW
-#ElonMusk #Tesla pic.twitter.com/FrabcbnZu3

Both the Plaid variants of the Model S & X saw their starting prices remain unchanged. The Model S Plaid now starts at $130,00 and the Model X Plaid is slightly cheaper starting at $120,000.

The latest price increases are unfortunate as they will put Tesla vehicles outside the price range of even a bigger swath of the population. However, according to Elon Musk, the price increases have been necessary since there is a significant parts shortage forcing Tesla to pay more flying out parts from various parts of the world.

However, in the long run, Tesla is still focused on lowering the entry price to the company’s vehicles. Elon Musk believes as Tesla builds more Gigafactories and localizes production to at least the continent the vehicles are sold in and as the parts shortage starts to get alleviated next year, we should see prices fall back down once again.

Tesla updates its vehicle prices often, as a result, it’s sometimes hard to keep up with the latest changes. Make sure to visit our site torquenews.com/Tesla regularly for the latest information.

So what do you think? Can Tesla keep the insane demand for its vehicles despite all the price increases? Also, will you be waiting for prices to come down or will you be placing your order now? Let me know your thoughts down in the comments below.

For more information check out: Hacking Tesla is Condoned by Traffic Safety Investigators Also, see Tesla Safety Features Make Its Brand a Cut Above the Rest

LG's New EV Battery Plant Is a Welcome News for Tesla
Tesla Giga Berlin's New Hurdle: It's Not Only the Gov't, but Now Tesla Itself
END_OF_DOCUMENT_TOKEN_TO_BE_REPLACED