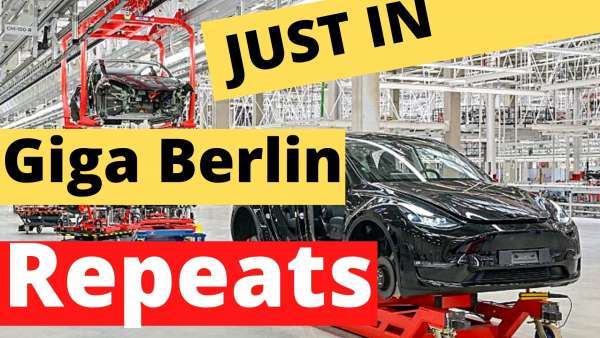 Brandenburg repeats the questioning of critics of the Tesla Giga Berlin factory in Grünheide (Oder-Spree) in a new update, Torque News just learned.

The Ministry of the Environment of Brandenburg said on Thursday that the State Office for the Environment decided to repeat Tesla Giga Berlin's discussions for reasons of legal certainty. The new procedure should therefore take place in the period from November 2nd to November 22nd, RBB reports.

In doing so, the state is responding to criticism from the environmental associations Naturschutzbund (Nabu), Green League Brandenburg, Bund für Naturschutz und Umwelt (BUND) as well as the Friends of Nature in Brandenburg. They accuse the environmental agency, the period between the notice and the beginning of the online consultation - - at least one week to have failed to comply. They refer to a procedure for water rights for the Hambach opencast mine, for which consultation was restarted because it had been announced two days in advance. Only after the end of the consultation on Tesla can all objections be examined and answered, which is the prerequisite for a final building permit.

The ministry announced that the example of the environmental associations is based on a legal opinion that deviates from the previous interpretation. Because it is unclear how the administrative courts in Brandenburg will decide in the event of a lawsuit, the procedure will be repeated. "The new discussion is to start on November 2nd, the announcement is scheduled for October 25th," said Potsdam. The comments from the latest discussion should therefore still be examined.

Tesla wants to start production in its car factory this year if possible, as the company said. The goal is to be able to build the first series cars before the end of the year. The construction of the "Gigafactory" is proceeding as planned. Batteries are also to be manufactured in Grünheide. However, there is no final approval from the state of Brandenburg for the settlement. Tesla is currently building on the basis of early approvals. "We expect to receive the final approval before the end of this year," it said on Wednesday.

The Ministry of the Environment, however, stated that a timetable for the decision on the permit could not be given. First of all, the new online discussion must also be evaluated.

Tesla Giga Berlin's building has attracted many critics. She feared, among other things, scarce drinking water and negative consequences for the environment. Since Tesla had expanded the original plans to include the battery factory, the construction plans were redesigned for the public in the summer. According to the Brandenburg Ministry of the Environment, 395 objections were received by mid-October, so that a total of 809 people and organizations raised concerns in the approval process.

LG's New EV Battery Plant Is a Welcome News for Tesla
Tesla Giga Berlin's New Hurdle: It's Not Only the Gov't, but Now Tesla Itself
END_OF_DOCUMENT_TOKEN_TO_BE_REPLACED