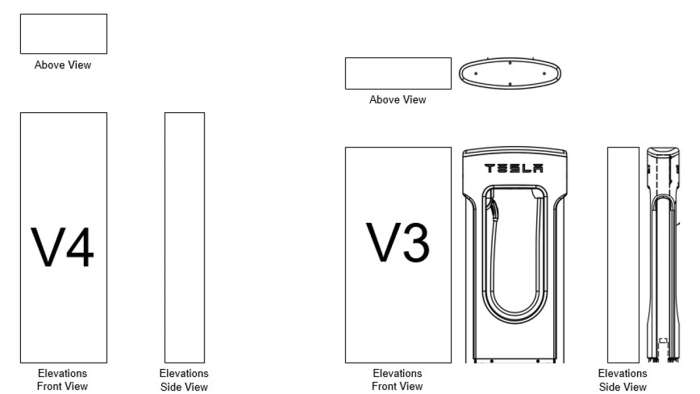 For some time now, it has been public knowledge that Tesla is working on the next generation supercharger V4. And today, thanks to a Twitter page focused on Tesla superchargers, we have gotten our first glimpse of the V4 superchargers.
Advertisement

All these factors added together have made Tesla’s superchargers the fastest and most convenient means of charging an electric vehicle for a while. To this day, the latter still holds, however, with the emergence of new charging networks and EVs that can charge at more than 250KW, Tesla has lost its number 1 spot both for the fastest charging EVs and the highest-powered DC fast charger.

Currently, Electrify America & Ionity, both competing charging networks to Tesla’s superchargers, have DC fast chargers that can output as much as 350KW. And vehicles like the recently launched Lucid Air and the Porsche Taycan have max charging speeds as high as 300KW & 270KW respectively.

However, the world’s most valuable carmaker doesn’t seem like it will accept being seconds to anyone. Tesla and CEO Elon Musk had previously hinted at an upcoming max charging increase for Tesla vehicles.

For instance, speaking at the Cybertruck unveiling event back in 2019, Musk, even though held off from revealing the actual charging speed for the futuristic truck, has still unequivocally stated that the Cybertruck will have over 250KW charging capability.

Still, despite Tesla hinting at faster-charging speeds for a while, the supercharger speed has been capped at 250KW since 2019. Lucky for us, however, with a recent glitch in Tesla’s app hinting at 387 KW charging speed and a new leak of a schematic drawing of V4 superchargers, it doesn’t look like it will be long before we see a Tesla charging in speeds over 250kW.

Our first hint at a faster V4 Tesla supercharger came in the way of Twitter user and Tesla owner TOI BOI. While TOI BOI was looking for a supercharger in the Tesla app, a station located at Boisbriand Quebec, Canada showed him a max charging speed of 387KW.

do you have something to tell us @elonmusk or is this a mistake https://t.co/GFAGCHRdp8

TOI BOI sadly was unable to visit the station and see if the supercharger actually is able to out the claimed 387KW. And soon after Tesla changed the max charging speed at the station to 250KW.

Most people haven’t given this incident much thought and have simply dismissed it as a one-off glitch uncorrelated with Tesla’s plans to increase supercharging speed however, today we got a second hint that suggests Tesla is working on faster V4 superchargers.

The information comes from @MarcoRPTesla, which is a Twitter page focused on Tesla superchargers. Even though the channel did not share the source of the leak, the Twitter page has nonetheless given us the dimension of the next-generation V4 superchargers.

As you can see from the pictures above, as compared to the V2 and V3 superchargers, the V4 superchargers are noticeably taller, much thinner from side to side, and have about the same size thickness.

As of now, this is all the information we have regarding the V4 superchargers. However, we will be sure to keep you posted as we learn more about Tesla’s plans. Until then, make sure to visit our site torquenews.com/Tesla regularly for the latest updates.

For more information check out: Tesla Model S And Model X Now Recognize Potholes On The Road, And Will Soon Be Able To Avoid Them