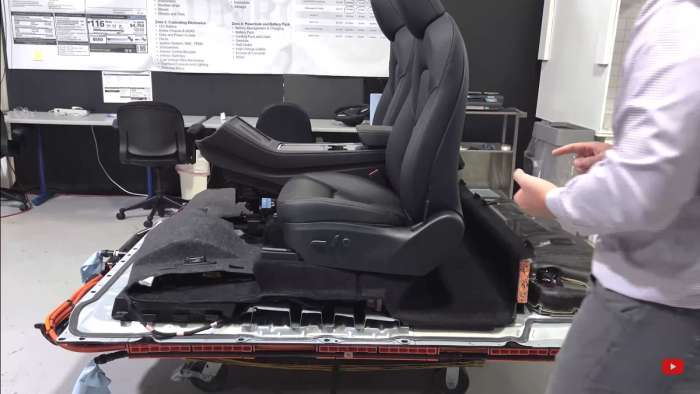 Munro & Associates has begun the first teardown of the 4680 Model Y with a structural battery pack. From the initial observations, the firm's engineers have called the structural pack architecture mind-blowing. And now, Musk has responded to Munro & Associate's comments saying "it is still far from optimized."
Advertisement

At the beginning of April, Tesla opened the company’s newest factory in Austin Texas. And at the opening party for Giga Texas, the EV maker also started the first deliveries of the refreshed Model Y with 4680 cells and a structural battery pack.

According to Tesla’s Battery Day presentation, the new 4680 cells in addition to the structural battery pack architecture are expected to increase vehicle range by as much as 54%, reduce the weight and improve performance.

Given Tesla’s lofty promise for the 4680 cells, there was a lot of excitement and high expectations for the first Tesla with 4680 cells and structural pack.

Last year, following Tesla’s Battery Day presentation and based on Elon Musk’s words we were expecting when the refreshed Model Y with 4680 starts deliveries that it could come with a 475-mile EPA range and a 0 to 60 time under 3 seconds.

However, after it finally started deliveries, the specs of refreshed Model Y have been nowhere close to those numbers.

Related News: Elon Musk Says “The 3 AM Oil Is Being Burned” to get Tesla’s Next FSD Beta Iteration Out

Although Tesla has yet to officially share the specs of the refreshed Model Y, thanks to individuals who have gotten delivery of the new vehicle, we know that the 4680 Model Y has a 279-mile EPA range, 5 seconds 0 to 60 time, and $59,990 starting price.

The 279-mile range was significantly under the expectations for the refreshed Model Y and it has even led some people to conclude that Tesla’s Battery Day presentation was completely a lie.

However, a few days after starting delivery of the 4680 Model Y, Tesla sent out a letter to employees explaining why the new Model Y, despite being powered by the 4680 cells and structural pack has a smaller range and worse performance than the Model Y Long Range with the last generation 2170 cells.

Despite Tesla’s explanation, there still remain several unanswered questions. And a couple of the big ones are the size of the battery pack and the EPA efficiency numbers.

For the size of the battery pack, there are currently a couple of conflicting reports suggesting that the vehicle either has a 50KWh pack or a 68KWh pack.

And the second unanswered question is why the 4680 Model Y has an EPA efficiency rating similar to the Model Y Long Range with 2170 cells. The Model Y Long Range despite the less energy-efficient cells and the longer 330-mile EPA range has a combined EPA MPGe (Miles Per Gallon equivalent) rating of 122.

This is practically identical to the 4680 Model Y’s EPA MPGe rating of 123. Given the new cells and the shorter range, the 4680 Model Y was supposed to be significantly more efficient.

Until now, no one has been able to definitively answer the above two questions however, lucky for us, it doesn’t look like we will have to wait long before we learn the inner secrets of the refreshed Model Y.

Munro & Associates, the Detroit engineering firm famous for various vehicle teardowns including the Model 3, the previous generation Model Y, and the Rivian R1T have gotten their hands on a brand new 4680 Model Y with the structural battery pack.

For the first installment of the refreshed Model Y tear down, rock star engineer Sandy Munro was not present as he is away in Italy to check out the 9000t Giga Press which will build the Cybertruck’s body.

Related News: Tesla Model S And Model X Now Recognize Potholes On The Road, And Will Soon Be Able To Avoid Them

Still, Munro & Associates President Cory Steuben and lead engineer Julian Aytes have begun the tear-down process and have already removed the battery pack from the rest of the vehicle.

What’s interesting about the battery pack, even before examining the inner working, is how the pack is attached to the vehicle. Since the battery pack is now a structural component and the floor of the new Model Y, the seats are directly mounted to the pack.

This means, that when Munro & Associates removed the battery pack, the two front seats and the center console had to be removed as part of the pack. Seeing car seats directly attached to a battery pack and outside the rest of the vehicle is kind of incredible.

Besides that, since this is the first video of the 4680 Model Y tear-down process, there isn’t much new information we learned about the new pack. But, from their initial assessment, Munro & Associates have called the structural pack design “mind-blowing”.

And Elon Musk has responded to these comments by replying to a Tasmanian article covering the teardown. And in response to the mind-blowing comment, Musk says “structural pack is the right overall architecture from a physics standpoint, but it is still far from optimized.”

Structural pack is the right overall architecture from a physics standpoint, but it is still far from optimized

It is not exactly clear what optimizations are left to unlock the promises of a structural pack however, Musk’s statement might point to why the refreshed Model Y has low MPGe numbers and a short range.

As of now, this is only the first of a 10-part series about the 4680 Model Y and the structural pack. And, we will be sure to keep you posted as Munro & Associates share more of their findings.

So what do you think? Excited to see the first teardown of 4680 Model Y & structural pack? Also, what do you think about the fact the seats are directly mounted on the battery pack? Let me know your thoughts in the comments below.

For more information check out: Samsung Is Setting Up 4680 Battery Production Line For Tesla And BMW