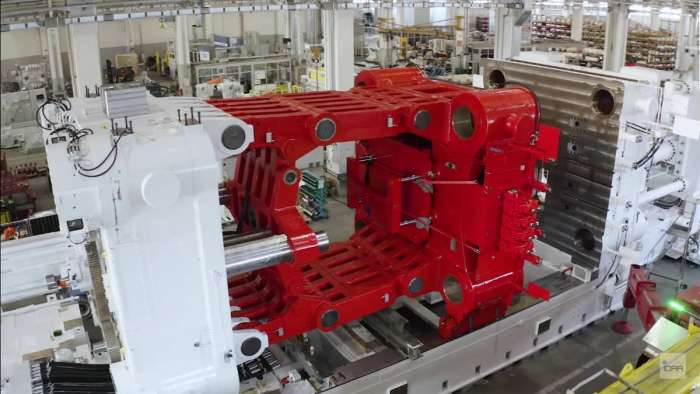 Tesla's Giga Press supplier, IDRA, for the past few weeks has been sharing the construction process of a massive 9000-ton Giga Press that will be used to produce the Cybertruck's body. And today, IDRA for the first time showed off the new 9000-ton Giga Press fully assembled.
Advertisement

A few weeks back, Tesla’s Giga Press manufacturer IDRA released a video teasing a new 9000-ton Giga Press being assembled at the company’s Italy factory. In the 21-second video, IDRA did not share a lot of details about the new machine besides stating it will be “coming in 3 weeks.”

Currently, Tesla uses 6000-ton Giga Presses to build the front and rear chassis of the Model Y as single pieces. Using the Giga Press has allowed Tesla to decrease parts that make up the rear body of the Model Y from 120 to 1.

This enables Tesla to eliminate several welding robots from the production line, decrease the footprint of the factory, and decrease manufacturing time, complexity, and assembly errors.

Having a single-piece rear body as opposed to 120 also makes the Mode Y lighter, stiffer, and simply an overall better product but at a cheaper price.

Going back to the new 9000-ton Giga Press, when IDRA released the video teasing this machine, there was confusion as to what product Tesla will use the new Giga Press for. However, a few days ago Elon Musk confirmed the new machine will be used to build the Cybertruck’s body.

According to most industry analysts, the Cybertruck is not expected to begin production until late 2023 with initial deliveries not starting until early 2024. However, today we have got some good news that suggests Tesla might begin Cybertruck production earlier than expected.

And the good news is that IDRA has finished assembling the 9000-ton Giga Press that will be used to build the Cybertruck. IDRA shared this information through the company’s official YouTube channel.

In the video, IDRA shows off the final assembly of the Giga Press. The parts we have seen getting built in previous IDRA videos all come together and now the machine stands as a single magnificent piece.

Currently, IDRA is holding an open house and showcasing the new Giga Press to industry insiders and interested individuals. According to a Redditor who was able to attend IDRA’s open house yesterday, the machine has already been shown in action to some of the event attendees.

It’s incredible to imagine the new 9000-ton Giga Press basically “printing” large chunks of the Cybertruck as single pieces. However, before Tesla can begin utilizing the new Giga Press, it first needs to undergo testing at IDRA’s facility.

After that, the machine will need to be disassembled, transported to the Cybertruck factory in Austin Texas, reassembled, undergo testing, and only then can the new 9000-ton Giga Press can start building the Cybertruck’s body.

This entire process is expected to take several months. However, we will be sure to keep you posted as learn further information. Until then, make sure to visit our site torquenews.com/Tesla regularly for the latest updates.

So what do you think? Excited to see the new 9000-ton Giga Press slated to build the Cybertruck’s body completed? Also, when do you expect Tesla will begin deliveries for the Cybertruck? Let me know your thoughts in the comments below.