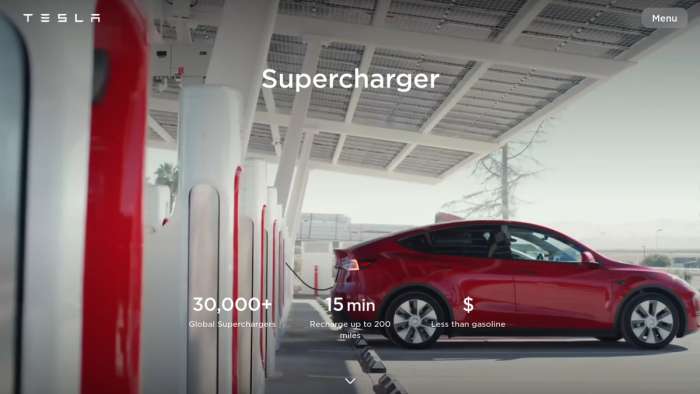 Tesla is currently conducting a pilot program to open up the supercharger network to none-Tesla vehicles. And this has raised the question, how much profit can the EV maker make from this move. Today, Elon Musk revealed the surprisingly small profit Tesla plans to make.
Advertisement

The supercharger network is considered to be Tesla’s biggest advantage in the EV world. Currently, Tesla has over 30,000 stalls at more than 2500 locations. And unlike most other charging networks, the Tesla superchargers are located along major highways and designed from the get-go for long-distance travel.

On top of this, since Tesla controls both the vehicles and chargers, Tesla owners can plan their trip, including the necessary charging stops, in a seamless manner right from the center screen of their vehicle.

Tesla also automatically reroutes owners to lesser used supercharger locations if there is congestion. And to put the icing on top, Tesla automatically preconditions vehicles before a supercharging session to improve charging speed by as much as 25%.

This has made Teslas really convenient for long-distance travel. Currently, Tesla is on the third generation of superchargers. with the latest iteration achieving speeds as much as 250KW or 200 miles in just 15 minutes.

Most analysts covering the EV space consider the supercharger network to be Tesla’s biggest moat. Some even go so far as to claim the expansive charging network is the number one reason for Tesla’s success.

However, Tesla CEO Elon Musk doesn’t see it that way. At a recent press conference, Musk said “our supercharger network is not intended to be a walled garden, It’s intended to be available to other manufacturers if they’d like to use it. The only requirements are that the cars must be able to take the power output of our Superchargers, and then just pay whatever their proportion of their usage is of the system. We’re actually in talks with some manufacturers about doing just that, and it will be exciting to share that news.”

“The general philosophy of Tesla is to do whatever we can to accelerate the advent of electric cars. Electric cars are really the key to a sustainable future. It’s incredibly important that we transition away from fossil fuels.”

Related news: How Much More Expensive Will Tesla Vehicles Get?

And in accordance with Musk’s promise, Tesla has currently opened the supercharger network as a pilot program for none Tesla EVs in the Netherlands, France, Norway, Germany, and Belgium.

And as the pilot program expands, analysts have been trying to predict how much profit Tesla can make by opening its supercharger network to other auto OEMs. One such analyst, Ross Gerber, who is the Co-Founder, President, and CEO of Gerber Kawasaki Wealth and Investment Management, just put forward this exact question to Musk.

In his tweet, Ross wrote “trying to model out the supercharger network value. It seems you work a 50% gross margin on the energy cost. Is this across the network or it varies by location?”. In his response Musk wrote “we aim for 30% GM [gross margin] or ~10% profitability, all costs included”

Tesla aiming only for a 10% profit is somewhat unorthodox. Given how much better the supercharger network is as compared to its competitors, one would expect Tesla to make a way bigger profit. However, this is not at all surprising given Musk’s desire to bring electric vehicles to the masses.

As of now, the supercharger network is only open to none Tesla vehicles as a pilot program. And as Tesla learns more, the EV maker can eventually decide to up the prices to increase its profitability. We will be sure to keep you posted as we learn more about Tesla’s future plans. Until then, make sure to visit our site torquenews.com/Tesla regularly for the latest updates.

So what do you think? Surprised by how little profit Tesla makes through the supercharger network? Do you think the EV maker should increase charging prices? Let me know your thoughts in the comments below.

For more information check out: Tesla (TSLA) Finishes Q1 2022 With Only 17 Inventory Vehicles In The US Also, see Volkswagen To Follow Tesla Production Methods To Improve EV Making: Trinity Project