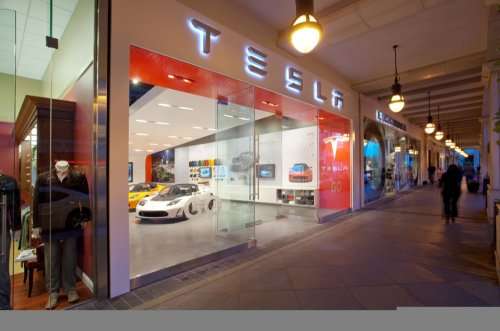 How many Model S cars can Tesla really sell?

Recent discussions here on Torque News have created debate over the viability of the Tesla Model S and Tesla CEO Elon Musk's projected production numbers for the car. If the company produces 20,000 cars in 2013, will it realistically be able to sell them too?
Advertisement

Last week, our own John Goreham penned an article in which he predicted that the major manufacturers' electric cars (Volt, Leaf) would ultimately succeed in the marketplace while small upstarts (Tesla, Fisker) would not. That article can be read here.

As would be expected, John's premise created a lot of buzz and commentary. Those of us in the automotive journalism trade know that anytime we mention certain vehicles in a less than favorable light, we will be inundated by the hardcore fans of that car who will make it clear that they think we're idiots. I myself have said that the Chevrolet Volt is "not all that" and was avalanched by "Voltophiles" calling me numerous names and nitpicking over every detail of my penmanship to find fault. This doesn't just happen with electric cars, of course. An article I wrote regarding the Chevrolet Corvair was also quite controversial, even among other automotive journalists who left commentary on my Facebook and International Motor Press Association threads regarding the article. Such is the nature of journalism.

It is knowing that the same contingent of Tesla fans will likely descend upon me that I delve into that car and its dubious future here. While I have little doubt that Tesla CEO Elon Musk's plans to build 20,000 cars next year are at least viable, it seems unlikely that the company will be able to sell twenty thousand cars in the same time frame.

Can Tesla Make 20,000 Cars?
Although there is ample room for failure, of course, it does appear at least feasible that the company could build that many cars in 2013. It has the facilities, would not need to expand its current workforce by much, and appears to have the supply lines for its needed parts and materials in place. Recent reports and filings by the company, which is relatively transparent now that it's publicly traded, show that batteries, motor parts, and aluminum - the material that makes up about 60% of the car's total - are lined up and already growing. The company has surpassed the 1,000 frame and rolling chassis mark in its production output. Many of the problems that could be expected to happen in these first stages of the car's production have happened or are happening and being resolved now, according to Tesla's Q3 2012 filing (more here).

The only thing that could slow Tesla down outside of an act of nature or similar event would be quality issues as production grows. Looking at Tesla's closest neighbor in the EV business, Fisker, illustrates how heavily this can impact a growing carmaker's mojo. It's very, very likely that Tesla will have at least one recall event during 2013, but if they are lucky, it will happen early on and be quickly taken care of and remedied on the production line before too many units have been affected.

Tesla already has, or at least is well on the way towards putting together, a full production shift for the S. To make 20,000 cars is only about 1,700 cars a month and is well within the capability of a single shift in a 20-day production month. The former NUMMI factory they are utilizing is capable of these numbers many times over if fully utilized.

Deposits As Sales Prognosticators
The most-often cited numbers relating to possible Model S sales are the number of pre-production deposits that have been made with the company. The trouble here is that these are deposits, not purchases, and can be canceled and refunded right up to the point of actual production. Tesla has more than enough deposits and sales, even given the cancelled deposits that inevitably come, to deliver all of the vehicles planned for production this year (about 2,500) and if production reaches 800+ a month in January, then all of the cars being built through to March or April of 2013 have also been sold.

The trouble with using deposits as sales indicators is that they only indicate those enthusiastic enough to put money down well ahead of the expected delivery of the vehicle. The Nissan Leaf, for example, has been produced in such low numbers that sales versus delivery have happened with a considerable lag between the time the customer orders their Leaf and that it actually appears in their driveway. On the other hand, the Chevrolet Volt used early deposits and interest as an indicator of very high sales volumes and over-produced the car to the point that they had a 90+ day glut of inventory and closed production for over a month to allow sales to clear out these large inventories.

The Model S is a car that, at its most base configuration, sells for about $57,400, but indications are that the average sales price will likely be in the $70,000 to $75,000 range. That's nearly twice the price of the Volt and well over twice the cost of the Leaf. Thus the Model S is selling in a very different market from the Chevrolet and Nissan electrics, but not quite in the extremely high price range of the Fisker Karma. This means the only comparable cars to the Model S are standard internal combustion vehicles rather than electrics and perhaps their (very low-selling) hybrid counterparts, making it hard to judge how large this luxury electric car's market might be.

The Elusive Model S Market
Sales volumes in the mid-sized luxury sport sedan market in North America are not large. It's one of the smallest in the overall automotive market, in fact, and is similar to pickup trucks in that brand loyalty is very, very strong. The Model S' uniqueness will certainly mean sales, as early deposits on future production attest. But that will not sustain sales through 2013 and Tesla will have to find many more traditional buyers. Competitive, but established ICE vehicles in the segment, such as the Audi A6 and Lexus GS, don't even sell 10,000 units per year, showing that the Model S has a tough row to hoe.

Add to that the fact that hybrids, the largest of the electrified car market, are less than 3% of the total automotive sales volume in the U.S. and most of them are low-priced Toyota Prius cars - a vehicle that costs 1/3 the price of a Model S. Total battery electric vehicle sales in the U.S., not including low-speed models, is less than half of one percent of the total automotive market.

Distribution will be another big hurdle that the company has begun addressing, but is not likely to overcome in only a year. Tesla has well under two dozen stores in North America. Competitor Lexus has about fifteen times that many outlets. At its current distributorship size (number of showrooms), Tesla would have to move about 1,200 units per showroom per year to meet the 20,000 goal. Assuming all sales are in the U.S. and Canada.

Of course, the company is working hard to get European certification to sell there - and will likely have it before the end of this year, if Musk is to be believed. They are also trying to enter some Middle Eastern and Asian markets, but no time frame has been given on those. Asia will likely happen first, but the Middle East could conceivably be where Tesla would potentially move the most cars in foreign sales. Well-heeled markets in Arabia and Israel have shown themselves capable of embracing electric vehicles at a rate better than others, but are limited in size.

Still, 20,000 units is a lot of (expensive) cars. Even with foreign sales, the company would have to sell most of its production here in North America.

Looking at the numbers objectively, doing what we can to gauge the market, and seeing the number of obstacles to be overcome to achieve Musk's 20,000 unit goal, it's very unlikely that Tesla will be able to build and sell 20,000 Model S cars in 2013. Once all markets are open and the car has been vetted, those numbers could be realistic - maybe in 2014 or 2015.

So while the Model S is an award-winning dynamo of publicity and the company's CEO is a public figure of much repute, the market is not likely going to bear 20,000 electric luxury cars in only one year. This does not reflect badly on Tesla Motors, which in all likelihood will achieve profitability in the next quarter, nor on its larger-than-life CEO Elon Musk, who has a history of making huge, bold claims and (eventually) following through on them. But Tesla fans would do well to remember that quarterly reports are as much a public relations exercise on behalf of the company's Wall Street trading as they are a reporting of the company's financial status.