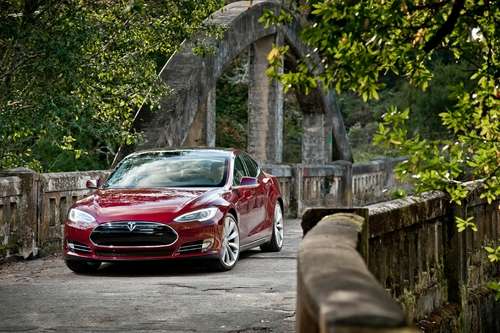 Tesla's Q3 had steep losses, predicts rapid revenue gains for Q4 and beyond

While Tesla Motors is revolutionizing the automobile, the company itself is transforming a from visionary role to that of a mass production automobile manufacturer.
Advertisement

As Tesla Motors transitions from electric vehicle visionary to a mass production automobile manufacturer, many are wondering whether the company will make it financially. It has been decades since the last successful automaker startup in the U.S. With Monday's release of 2012 third quarter results to shareholders, the company claims it is successfully making this transition, that by December the company's production rate will be high enough to generate positive operating cash flow, and that by the end of the year the production rate will be twice that level. The company has a long list of other good news to share including awards and new show-rooms.

The company's financial status is most critical to anything else that Tesla Motors might achieve. It doesn't matter how beautiful is the company's vision, if they can't generate enough profit to pay for the company the vision will crumple.

Q3 revenues were $50 million, an 88% increase over 2012 Q2. The company attributes this to deliveries of the Model S (253 deliveries) as well as sales of the remaining Roadsters (68 sales) being sold outside the U.S. They also received revenue from Toyota for powertrains on the GenII Toyota RAV4 EV. Development progress on the electric drive train for the Mercedes Benz EV is on schedule, and generates a bit of revenue.

While revenue growth is great, R&D expenses alone ate up that revenue. Total loss for the quarter (GAAP basis) was $111 million.

What will turn around this pattern of steep losses and the need to raise investment capital to cover expenses? More sales, hence more production. There are thousands of people waiting patiently (or not) to purchase their Model S sedan, each of which is a large chunk of revenue.

Last week Elon Musk tweeted that they'd produced the 1000th Model S car body. The manufacturing rate has increased from 5 Model S's per week at the beginning of Q3 to 100 cars per week by the end of Q3, and since then they've increased the production rate to 200 cars per week. This translates to 10,000 cars per year. The company claims this production level is the threshold required to "generate positive operating cash flow". By December the production rate is expected to reach 400 Model S's per week, or 20,000 per year.

The production goal for 2012 remains decreased at 2,500-3,500 Model S's in 2012. This is less from the original projection of 5,000 Model S deliveries in 2012, and the company points to supply chain problems, saying they resolved "a myriad of supply chain issues in Q3 and are continuing to work with our suppliers to improve the timely and efficient delivery of parts."

If this progresses as the company says it will, they expect to achieve "positive free cash flow" which is defined as "cash flow from operations, inclusive of capital expenditures."

In short, Tesla is ramping up production, and will receive a greater flow of revenue, and this revenue flow will be enough to pay for the company's expenses.

As if ramping up electric car sales to 200 or 400 cars per month isn't amazing enough, the company has other accomplishments to boast about.

One is the rave reviews and accolades being showered upon the Tesla Model S. For example, last week Automobile Magazine named the Model S as the Automobile of the Year, and Yahoo Auto's did likewise.

Tesla describes the tone of the reviews as "multiple objective critics are saying that the Model S is not simply the best electric car, but the best car of any kind" and that this marks "a turning point in history where, for the first time, a purely electric car is a better product than any gasoline car."

The next accomplishment is the launch of the Supercharger network. The Model S with 85 kilowatt-hour battery pack already has a 265 mile EPA certified electric driving range, which simply blows the doors off other electric cars and revolutionizes the conceptualization of the electric car. The Supercharger simply doubles down on the Model S capabilities by giving it a quick charging capability more powerful than any quick charging technology to date. With the Supercharger a Model S can regain up to 165 miles of range per 30 minutes of charging. This makes the Model S the first electric car that can realistically implement that American past-time, the Road Trip. Tesla began building the Supercharger network with a few stations launched in California during Q3, and over the coming years that network will be built nation-wide. Tesla Model S owners will be able to use the network for free (no cost).

Fast, free, electric travel over long distances such as Los Angeles to New York is simply a complete game changer for the electric car industry and upstages everything the other automakers are planning.

The last accomplishment was the opening of more Tesla Stores and service centers, even in the face of objections from the traditional automobile dealers associations. The company now has 29 showrooms around the world, and are planing to open another five in North America by the end of the year. They're also aggressively opening new service centers, and by the end of the year expect that over 85% of Model S reservation holders will be within 50 miles of a Tesla Service Center, and 92% will be within 100 miles of one.

Tesla Motors was started almost 10 years ago with a big vision, to revolutionize the automobile and make a big impact on the environmental and climate impact of driving. The founders knew that to achieve these massive goals, they had to develop electric cars that blew up the negative stereotypes about electric cars. The iconic Tesla Roadster was the first step, and now the company is doing it again with the Tesla Model S and plans a repeat performance in 2014 with the Tesla Model X.

John Goreham wrote on November 6, 2012 - 10:02am Permalink
According to Elon Musk, through the end of September 250 Model S vehicles have been delivered to customers in the 5 months since the car was officially launched and offered for sale. It had built 359. The company did also say it has finally hit the 1000 unit mark for frames of the car after more than 5 months of production. Let's look back in 8 weeks and see how Tesla did in meeting its 5000 unit production goal in 2012. I would peg the total model S units delivered to customers at 1,200 units in 2012. If there is one single thing that destroys shareholder confidence it is setting goals, missing them, revising them down, and then missing the lower goal. The money walks away.
Anonymous wrote on November 6, 2012 - 10:45am Permalink
It's great to hear a company such as Tesla is doing something positive for the automotive industry. Now if GM and Ford would start doing the same would be a smart thing for them, and at the same time with the production capacity that GM or Ford have they would be able to bring the cost down to probably half and that would give enormous sales forecasts. Just my 2 cents.
John Goreham wrote on November 7, 2012 - 3:01pm Permalink
Thanks - You just inspired a story!

Tesla Contemplates A New Strategy for China Retail even As Sales Boom
Jay Leno on Elon Musk & EVs: “I Think He Should Get ... Credit"
END_OF_DOCUMENT_TOKEN_TO_BE_REPLACED